It’s the second part of our series, “Seoul Metro Turns 40.” Click here to see the previous part.“I’ve been all around the world and ridden many a subway train, but only one’s so near-perfect I can hardly complain. It’s the Seoul Metropolitan Subway System.”These lines are part of “Seoul Subway Song” made by Michael Aronson, a U.S. citizen living in Korea. The music video he produced by himself tells of the convenience and merits of the Seoul metropolitan subway system, based on his years of experience using it. 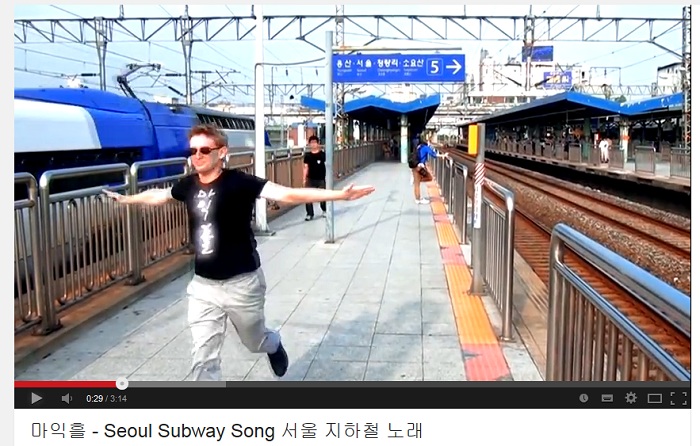 One of the greatest merits of the Seoul metropolitan subway that has mesmerized foreign passengers is that there are plenty of stations over nine lines, each linked by a short distance. It offers visitors a number of options to get to a destination, and also, wherever they go, visitors can expect to arrive in a maximum of an hour and a half. In celebration of the 40th anniversary of Seoul’s subway system, Korea.net introduces a number of unique stations under three categories: stations with traces of the past, stations close to shopping districts and, finally, stations equipped with cultural space. “Traces of the past”First of all, City Hall Station, which connects the number one and two lines in central Seoul, has long been regarded as an important “traffic hub” of the capital city. Surrounded by numerous high-rises including the Seoul Government Complex, Seoul City Hall, large hotels, newspaper publishing companies and shopping centers, City Hall Station is one of the best areas to spot the busiest people of the city. At the same time, the station is where Joseon’s historical relics remain, too. Only a one minute walk from Exit two sits Deoksugung Palace, one of the main palaces of the Joseon Dynasty. Also, five minutes away from the station lies Wongudan Altar, a site where the rite of heaven and the Emperor’s coronation ceremony were performed, as well as the place the old Russian diplomatic legation building was built in the late Joseon era. 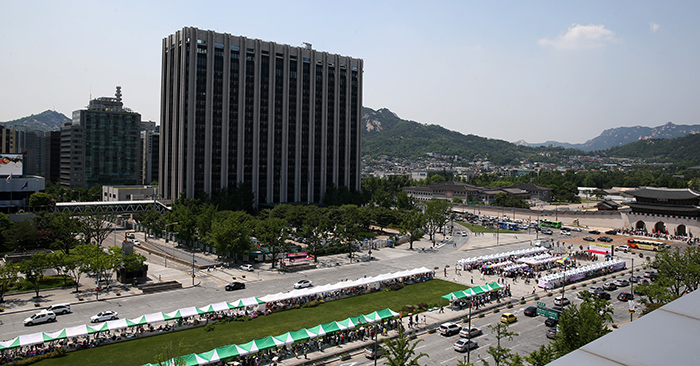 Gwanghwamun Square seen in the daytime (above) and nighttime (below). It is where both the traditional and modern aspects of Korea exist. (photos: Jeon Han)

City Hall Station is close to Gwanghwamun Station on line number five and Gyeongbokgung Station on line number three, both surrounded by many historical sites. One of the most important sites is Gyeongbokgung Palace, the first and most important palace of the Joseon Dynasty. Well known for its magnificent beauty and grand size, the palace is always crowded with tourists who visit to learn about the nation’s history as well as to appreciate the palace’s architecture and garden landscape. Passing the main palace of Joseon behind and walking along Hyoja-ro for about ten minutes can take visitors to Cheong Wa Dae, the residential place of Korean presidents. Sarangchae, a small building in front of Cheong Wa Dae, is particularly popular and is frequented by tourists. It is widely open to the public, being used as a venue for various cultural events and, recently, for weddings as well. Inside is an exhibition dedicated to the history of Seoul, and Korean presidents. It is also equipped with souvenir shops and restaurants where Korean traditional food is on sale. 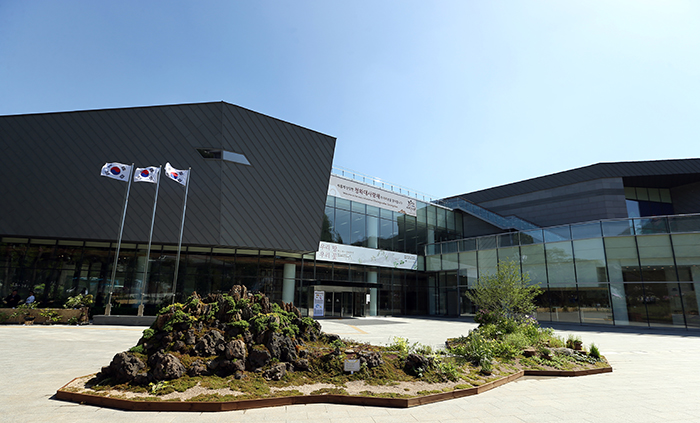 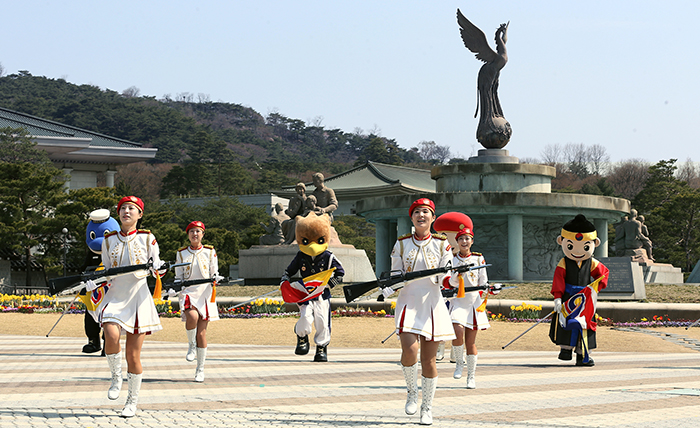 A variety of cultural events take place in the square in front of Cheong Wa Dae. Pictured is a guard inspection ceremony. (photos: Jeon Han)

Dongnimmun Station on line number three is marked with a sad history. The station is in the vicinity of Seodaemun Prison History Museum, opened in 1907 under Japanese influence. It offers visitors the opportunity to get a glimpse of the nation’s history weighed down by the war. Hapjeong Station on line number two is known for being close to the Foreign Missionary Cemetery built in 1860. The cemetery park, about 13,000 square meters in size, is home to more than 500 tombs of foreigners who had dedicated their lives to the development of the nation during the late Joseon Dynasty in the sectors of media, education and religion. “Shopping Mecca”Seoul Station is a main gateway to the city and is where the history of the Korean railways began. The station is characterized by the two co-existing elements of tradition and modernity. In one corner of the station lies the remains of the old station building, covered with a domed ceiling roof designed in the Byzantine style. Its heyday has long gone, but the hall was recently transformed into an exhibition space, attracting even more visitors. In addition to subway lines number one and four, Seoul Station connects itself with the airport rail link and even KTX trains, becoming the station most brimming with tourists. The new station building is well equipped with outlet stores, shopping malls, grocery stores and a variety of restaurants, attracting the attention of passers-by. The best way to get to Myeongdong, one of the nation’s greatest shopping districts, is to get off at Euljiro 1-ga Station on line number two, or Myeongdong Station on line number four. The streets of Myeongdong, one of the greatest shopping areas in Seoul, are densely packed with fashion and cosmetic stores. Also, the small alleys, in between building blocks, are full of famous restaurants that offer a variety of culinary options to visitors. For these reasons, the streets are a highly recommended must-visit place for dating couples and foreign visitors. The street stalls where a variety of accessories and street food is available at reasonable prices offer something different from the brand shops. Among the many districts of Gangnam is the most affluent region in the nation, the area centered around Apgujeong Station on line number three, which is always crowded with fashion trend-setters. Rodeo Street Apgujeong in particular, is where you can find everything concerning fashion from stores dealing in luxury outfits, shoes, innerware and accessories, to large SPA brands and European brands. The district is most loved by young people who seek unique, full-of-character fashion items that are high in demand but low in supply. 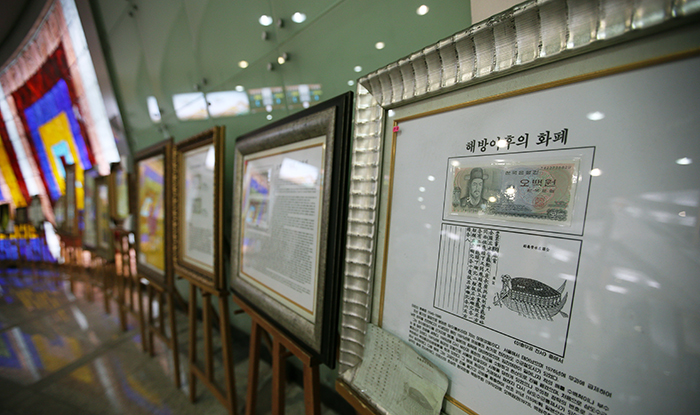 Noksapyeong Station on line number six is known as the most beautiful station in Korea. Pictured is an exhibition themed on a banknote in the station. (photos: Jeon Han)

Noksapyeong Station on line number six is known for having the most beautiful interior and exterior. Thanks to the glassy ceiling that allows the natural sunlight to be shed on the underground space, the station seems bright and pleasant. It’s in the vicinity of Itaewon, one of the most exotic neighborhoods in Seoul. Favored by U.S. soldiers and foreign tourists since the early 2000s, Itaewon has now become a place where you can enjoy the cultures of a number of countries. Especially, the culinary trip is one of the best recommendations for travelers. Here they can experience the characteristics of Italy, France, Thailand, and even rare Bulgaria. The district also provides visitors the chance to learn about global fashion trends and appreciate unique architecture such as at the nearby Mosque. 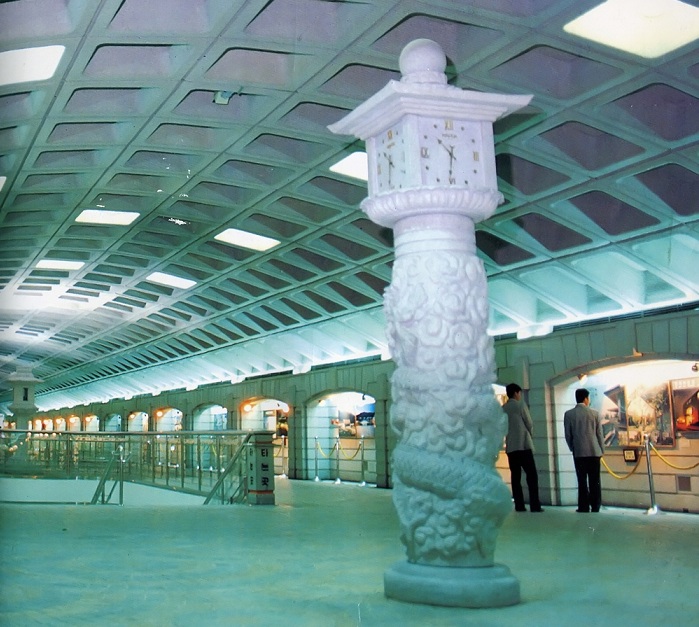 “Full of performances and exhibitions” A few subway stations function as cultural spaces. More than ten stations — including Euljiro 1ga, Dongdaemun History & Culture Park, Sports Complex and more — are equipped with stages that offer regular music concerts and performances. Gyeongbokgung Station on line number three has a gallery in its basement, giving people a moment to take a breath. Except for pre-arranged performances and exhibitions, citizens gather at various stations to celebrate special days such as World Cup games and Christmas Day. 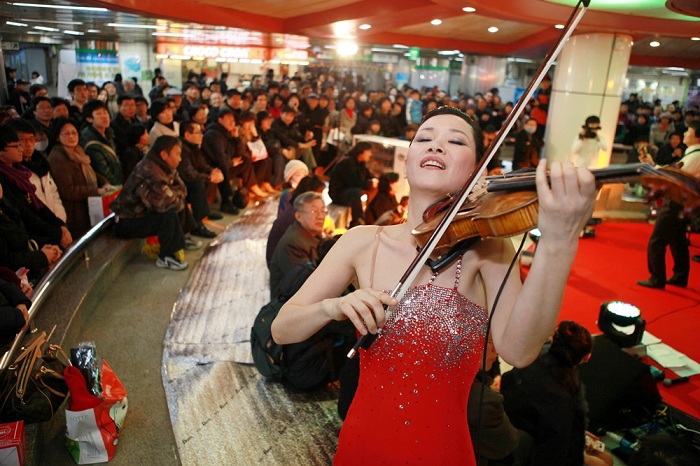 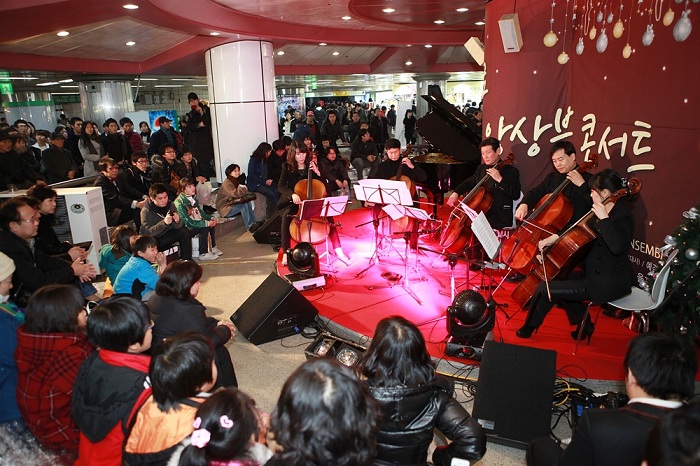 Seoul citizens gather at Sports Complex Station on line number two to cheer for the Korean team at one of the games during the 2002 World Cup. (photo courtesy of Seoul Metro) 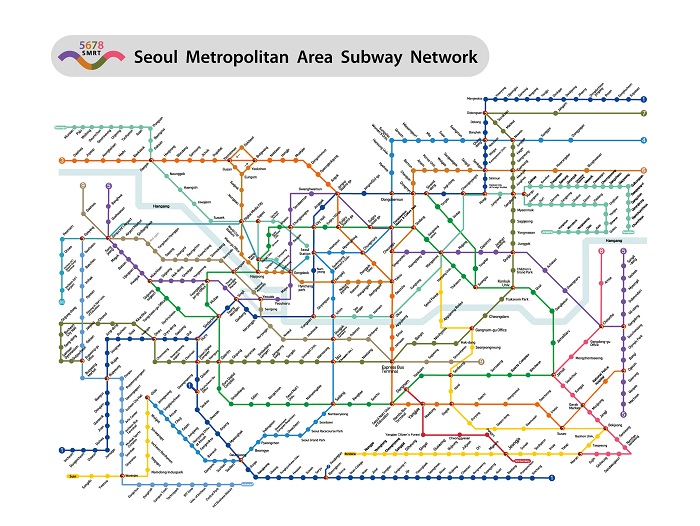