“Joseon is a country of mountains. Wherever you step your foot, you cannot miss mountains.”So wrote Claude-Charles Dallet (1829-1878), a French Catholic missionary, when he arrived in Korea in the mid-19th century. As Dallet says, mountains are everywhere in the country, whether in the heart of the city or out in the countryside. Recently, the Washington Post published an article about hiking in Korea, a popular pass time across the country. Many people enjoy all types of hiking, whether it be professional rock climbing or just weekend strolls in the woods. Hiking along one of the many not-too-high mountains near the city is highly recommended. Visitors to these mountains are able to enjoy easy access to the trailhead via bus and subway and a stunning cityscape from above. Bukhansan National Park, the mountainous public park straddling the northern reaches of the city, stretches across some 77 square kilometers. It was designated as the 15th Korean national park in 1983. Nestled and unfolding across the Uiryeong Pass, Bukhansan Mountain is accessible in an hour from just about anywhere in Seoul. In 2013 alone, over 7.15 million day trippers paid a visit to this mountain, making it the most-visited mountain of the year. This mountain park is popular among all types of trekkers. Known for being accessible by subway, it has gained much more popularity than other locations.There are 21 official hiking trails leading up and across the mountains and valleys of the park. The Korea National Park Service (KNPS) also sells little passport books in which hikers can collect the 11 stamps spread out across the view points of the park. Each trail has a different name and theme, such as Pine Tree Forest Trail, Pilgrimage Trail, Cloud Garden Trail and Meditation Trail. There are smooth paths, suitable for dating couples, while some trails are steep enough to require professional training.

Among the many beautiful viewing points that exist across the park, there are 10 must-see views that are recommended by the KNPS, based on a public survey of 6,000 hikers taken in May and June earlier this year. The top location, selected by 22 percent of respondents, is Baegundae Peak, the highest point of the mountain. The picturesque sunrise there unfolds across a backdrop of the early morning city. During the Silla Kingdom (57 B.C.-A.D. 935), a group of theatrical performers is known to have climbed this peak regularly. Also, Yi Seong-gye (1335-1408), founder of the Joseon Dynasty (1392-1910) is known to have climbed this peak to develop and train his spirit. 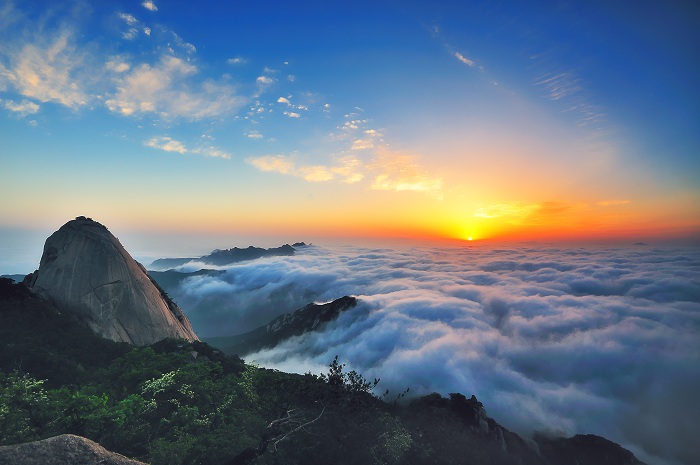 For those who have a hard time reaching the top, relatively easier trails up to Obong and Insubong are recommended. They came second and third in the rankings, respectively. Starting at the Uiryeong Hiking Support Center, it takes about 40 minutes before you can see the famous five granite peaks, each jutting into the air. If you’re lucky, you will be able to see the mysterious, beautiful scene of a sea of clouds unfolding around Insubong Peak.

Obong is famous for its five granite peaks.

The top ten must-see spots in the national park also include the foliage of the Hidden Wall, the Bukhansanseong Fortress, Seoninbong Peak, Samgaksan Mountain, the eight scenic peaks of the Uisang Ridge, the Bibong Ridge and the Mangyeongdae Peak. 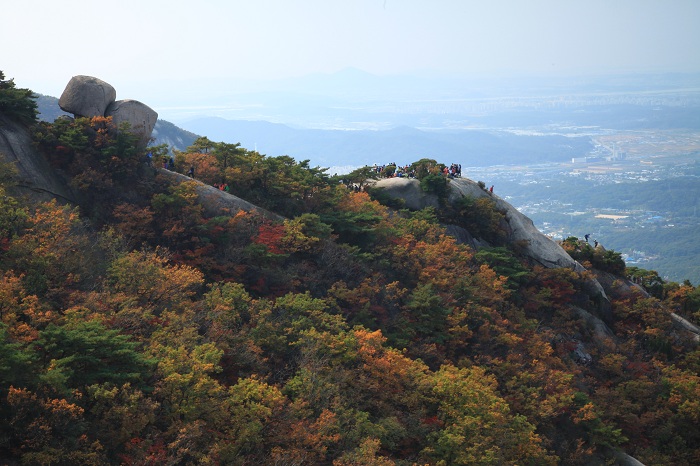 The foliage of the Hidden Wall

This coming autumn, take some time off and enjoy gathering the eleven stamps as you hike through Seoul’s northern mountain park. The KNPS also provides galleries, scenic points and easy access for each location on its website, along with estimated hiking times, difficulty levels and points of interest near the trailhead, as well as information about mobile applications and park-related comic strips.