When World War II drew to a close, the 35-years of agonizing Japanese colonial rule also came to an end on the Korean Peninsula. Swept by the rapidly intensifying Cold War, Korea was divided along the 38th parallel, creating two separate governments on the peninsula. The partition of Korea into mutually antagonistic governments led to the Korean War as the North Korean military forces crossed the 38th parallel and invaded the South on June 25, 1950. After the fighting ceased, the so-called provisional partition became permanent and the peninsula still remains divided today.

Even after signing the armistice in 1953, the Cold War confrontation persisted on the Korean Peninsula. The Republic of Korea adopted a North Korea policy with the goal of achieving a unified Korea under a democratic system. On the other hand, North Korea sought its ways to achieve its goal of communizing the entire peninsula.
In the early 1970s, the animosity between the West and the East began to slowly thaw. By riding the wave of the surfacing peace-promoting spirit in the international community, South and North Korea took steps toward warmer relations. The two Koreas announced the South-North Joint Communique on July 4, 1972 and subsequently held inter-Korean dialogue and exchanges through the South-North Coordinating Committee and the Red Cross Society. The two Koreas, however, could not easily overcome the mistrust that they had built up over the previous two decades.

South and North Korea continued to experience turbulence, greatly affected by the rapidly shifting international environment. Amid uncertainty and confusion, the South-North Korean relationship entered a new phase in the mid-1980s when the communist states began advocating reform and openness.

Pyeonghwa-Nuri Park, Imjingak: Located in Paju, Gyeonggi-do, this is a culture park formed to turn Imjingak, which was a symbol of the conflict between the two Koreas and the cold war era, into a landmark for reconciliation, co-existence, peace, and unification.

Notwithstanding the rapidly changing world order, the South Korean government overcame the unprecedented challenges by taking appropriate measures, adopting a new formula for achieving national unification, officially known as the “Korean National Community Formula” in September, 1989. The formula was established under a framework that principally promotes independence, democracy and peace. The South Korean government attempted to achieve national unification through exchanges and cooperation.

The mood of reconciliation, however, soon came to an end when North Korea provoked the first nuclear crisis by withdrawing from the NPT in 1993. At the time, South and North Korea were pursuing an inter-Korean summit meant to take place in 1994. The heightened hopes for the summit, however, crumbled to dust by the sudden death of Kim Ilsung.

South Korea joined the United Nations in August of 1991 along with North Korea, entertaining high hopes for reconciliation in the early 1990s. The mood of reconciliation, however, soon came to an end when North Korea provoked the first nuclear crisis by withdrawing from the NPT in 1993. At the time, South and North Korea were pursuing an inter-Korean summit meant to take place in 1994. The heightened hopes for the summit, however, crumbled to dust by the sudden death of Kim Ilsung. 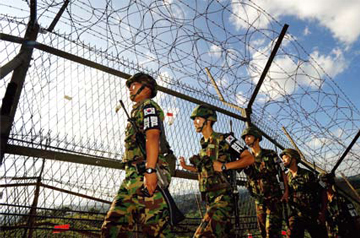 Soldiers at the demarcation line in the Demilitarized Zone near Cheorwon

The fifth round of the high-level talks in 1991

Relations between South and North Korea rapidly deteriorated and remained in a deadlock over the next few years. During this time, North Korea faced a dire famine, barely eking out a living.

In the late 1990s, the South Korean government promoted various exchanges and cooperation projects with North Korea, increasing humanitarian assistance under the principle that political and economic matters are two separate issues. On June 15, the first summit between the leaders of the two Koreas took place and it served as an impetus of the increase in the South-North exchanges and cooperation.

As a result, South and North Korea were able to establish the Gaeseong Industrial Complex, build the Gyeongui and Donghae railways, and initiate the Mt. Guemgang Tourism Project. As of February, 2011, more than 390,000 South and North Koreans have crossed the border, trade has reached the amount of US$14.8 billion dollars and US$2.9 billion in humanitarian aid has been delivered.

The improving inter-Korean relations came to an end when North Korea conducted a nuclear test in October 2006 and the effectiveness of the policy came under great criticism. The second inter-Korean summit took place one year after the nuclear test, but the two Koreas were not able to solve the nuclear conundrum, greatly concerning the people of Korea.

Meanwhile, the Lee Myung-bak administration took office and announced its new policy initiative called the “Vision 3000: Denuclearization and Openness” in 2008. The Lee administration introduced the policy of co-existence and common prosperity based on the principle that South Korea puts the highest priority on reconciliation and cooperation. The main objective of policy is to create a new peace structure on the Korean Peninsula. It aims to resolve the North Korean nuclear issue; to establish a joint economic community through mutually beneficial economic cooperation; to help North Korea restore its economy; and to pursue the happiness and security of the Korean people by resolving humanitarian issues facing the two Koreas.

North Korea, however, refused to cooperate, cut off all South-North talks and chose military provocations against the South. The South Korean government is determined to hold them accountable and stand firm by adhering to its original policy.

With the announcement of the Presidential Declaration for National Self-esteem Unification and Prosperity on July 7, 1988, South and North Korea officially promoted inter-Korean exchanges and cooperation. Inter-Korean exchanges and cooperation stopped temporarily when North Korea withdrew from the NPT in March of 1993, but it eventually resumed its course and remains in effect until now. 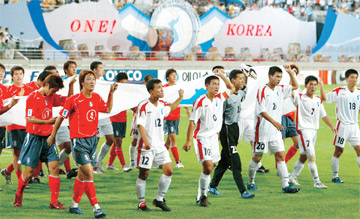 However, tensions on the Korean Peninsula have flared since the South Korean patrol ship Cheonan was sunk on March 26, 2010 in the Yellow Sea, which killed 46 South Korean sailors. Despite North Korea’s denial of any involvement in the incident, a multinational investigation has concluded that a North Korean submarine attacked the Cheonan with a torpedo.

The incident chilled inter-Korean relations and seemed to freeze all exchanges between the two Koreas. As soon as the investigation team revealed that Cheonan was sunk by North Korea, President Lee implemented countermeasures called the May 24 Measures. The South Korean government suspended all inter-Korean exchanges and cooperation with the North except the business operation in the Gaeseong Industrial Complex and the pure humanitarian aid for the underprivileged people in North Korea.

On 23 November 2010, North Korean forces fired around 170 artillery shells and rockets at South Korea’s Yeonpyeongdo Island, near the inter-Korean maritime border, hitting both military and civilian targets. Two South Korean soldiers were killed, 15 were wounded and two civilians died. The shelling also caused widespread damage on the island. The incident caused a further escalation of tension on the Korean Peninsula and prompted widespread international condemnation of the North’s actions. The United Nations declared it to be one of the most serious incidents since the end of the Korean War.

The Gaeseong Industrial Complex is an economic cooperation project jointly developed and pursued by the two Koreas near the border city of Gaeseong, Hwanghaebukdo, North Korea. After official inter-Korean consultations and an agreement between Hyundai Asan and North Korea, construction of the site was commenced on August 22, 2000 and was completed in June, 2003. In June 2004, 15 tenant companies started their business in the GIC, and as of February of 2012 there were 123 companies operating in the GIC.

The GIC is established to extract maximum profits and mutually benefit both South and North Korea by bringing the South’s capital and technology together with North’s labor and land. Gaeseong, which once had been notorious for being full of tension and confrontation, is gradually transforming into an area of peace and cooperation through the GIC project. The annual volume of production in 2012 was approximately 470 million US dollars and the value of exports recorded 36 million US dollars. The South Korean government is trying its best to maintain the GIC in accordance with the South-North agreements. 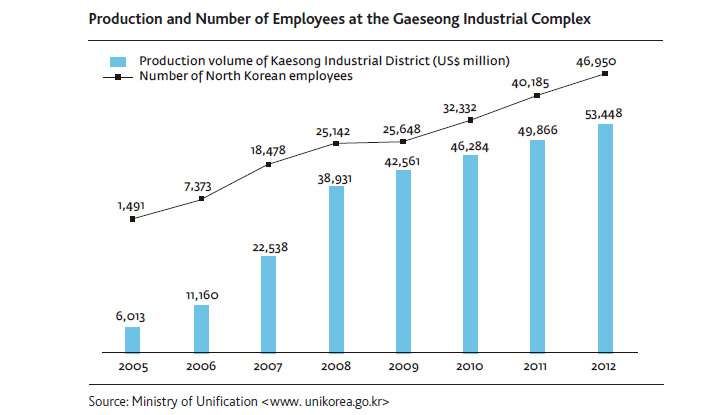 Reunion of separated families of South and North Korea

Since 2000, 18 rounds of face-to-face reunions and seven rounds of video reunions have been held, allowing 21,000 people to reunite with family members that they had lost contact with since the end of the Korean War. North Korea unilaterally cut off communication channels between the South and North Korean Red Cross offices in 2008 but the two agreed to resume the reunions at the Inter-Korean Red Cross talks in 2009 and 2010 for the Thanksgiving holiday. A total of 1,744 dispersed family members met up with each other in 2009 and 2010.