Three groups of highschoolers have put forth noticeable performances in three international Olympiads. The Korean team recently won the International Physics Olympiad (IPhO) for the second year in a row, and in two separate international competitions covering IT and biology, the Korean team came in sixth. The five Korean teenagers who participated in the 45th IPhO all won gold medals, coming in first for the second consecutive year in a row. China and Taiwan also topped the rankings, alongside Korea. A total of 377 students from 83 countries participated in the annual competition, which took place in Astana, Kazakhstan, from July 13 to 21. 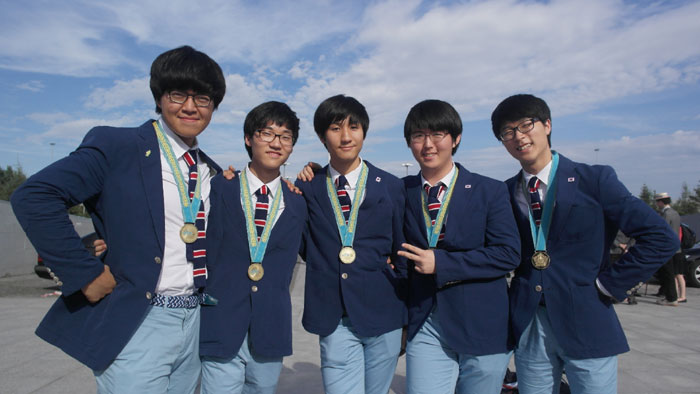 The Korean students who won a gold medal in the IPhO 2014 pose for a photo. (photo courtesy of the Korea Foundation for the Advancement of Sciences and Creativity)

IPhO first began in Warsaw in 1967 with five participating countries from Eastern Europe. The annual competition offers an opportunity for talented physics students to show off their capabilities and engage in cultural and information exchanges about science education. The official languages of the IPhO are English, Russian, French, Spanish, German and Chinese. Students under 20 years of age who have not yet received a university education can participate in the competition. Up to five students from each country can participate each year. Korea has been participating in the competition since 1992. Moving beyond physics, Korean students came in sixth in the 26th International Olympiad in Informatics (IOI), winning two gold medals, one silver medal and one bronze medal. This year’s IOI took place in Taipei, Taiwan, from July 13 to 20. A total of 311 students from 80 countries participated in the annual IT competition. All members of the Korean team won medals. The IOI was first held in Bulgaria in 1989. Students talented in information technologies and computer science show off their abilities in this yearly competition. 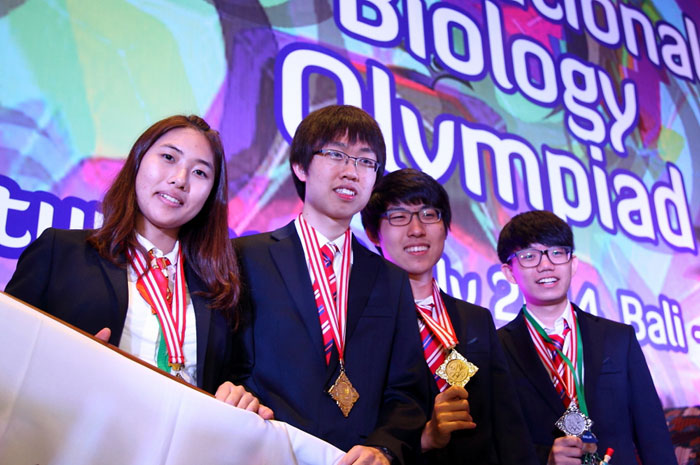 The Korean students, including Shin Ha-neul (left), who participated in IBO 2014 pose for a photo. (photo courtesy of the Korea Foundation for the Advancement of Sciences and Creativity)

Finally, Korea also ranked sixth in the 25th International Biology Olympiad (IBO), winning two gold and two silver medals. This year’s IBO was held from July 5 to 13 on Bali, in Indonesia. The biology competition was attended by 241 students from 61 countries. Korea’s Shin Ha-neul received a total score of 532.96, putting her in first place in the individual rankings. The IBO was first held in Czechoslovakia in 1990. Talented biology students participate in the annual competition and show off their potential. Korea has been participating in the IBO since 1998 and has so far recorded four victories.