The story of Kongjwi and Patjwi is a beloved and popular Korean folktale made around the late Joseon period. The folktale is known to exist in 17 variant forms, and the novel version was first published in 1928. Often compared to the Western fairy tell of Cinderella for sharing common motifs, Kongjwi and Patjwi also features a wicked stepmother, a misplaced shoe, and helper-characters with magical powers. The universal theme of “good prevailing over evil” is also found in both. These commonalities appear in almost all variations of the more than 1,000 Cinderella-type stories known to exist worldwide. These commonalities notwithstanding, Kongjwi and Patjwi differ markedly from its Western counterpart in that the Korean story does not feature a wedding denouement. The protagonist, Kongjwi, does marry her “Prince Charming” but the story is far from over. Nor do they live happily. In fact, the so called “Prince Charming”—charming as he may be—does not guarantee Kongjwi any happiness. Ironically, the marriage is only a harbinger of more hardships to come. It instigates the jealous stepsister, Patjwi, to murder Kongjwi and take her place. But more importantly, perhaps, is the fact that only by sheer will and determination is Kongjwi resurrected and able to avenge her own death. 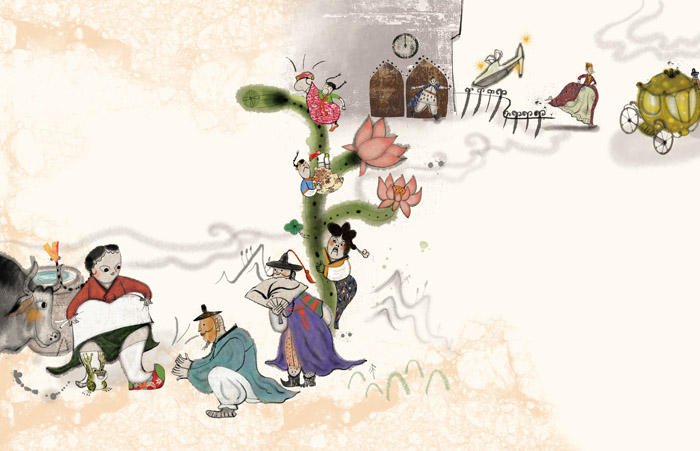 Among the many different foreign adaptations of Kongjwi and Patjwi, American author Shirley Climo’s The Korean Cinderella (HarperCollins, 1993) is arguably the most popular and widely-read version of its kind. A children’s book by design, The Korean Cinderella is said to be “a retelling based on three of the ‘half a dozen’ Korean Cinderella variants.” The book is highly regarded for its detailed research of Korean culture, not to mention its colorful and vibrant illustrations. The only caveat is that the story in itself is none other than the Western Cinderella story, only with Korean characters set in Joseon Dynasty. Like the Western Cinderella story, Climo’s story ends when the protagonist, Pear Blossom, marries her “Prince Charming,” the magistrate, and the two live happily ever after. The original version of Kongjwi and Patjwi gives the audience a rare insight into the morals, values, and customs of the day. For instance, Kongjwi’s resurrection and transformation—first into a lotus flower and later into a marble—reveals some elements of shamanism that were present in Joseon. Shamanism, an indigenous religion of Korea, was centered on the belief that life force exists in all natural objects. Lotus flowers or marbles themselves are recurring motifs in Korean literature that symbolize immortality and perfection. Similarly, the difficult tasks handed out by the stepmother in the beginning of the story reflect agrarian life in Joseon. Tasks such as filling the water jar, weaving hemp cloth, and crushing rice were all typical chores expected to be done by women. The universal and unique nature of Kongjwi and Patjwi is its appeal. In the story, Kongjwi’s stepmother is also seen handing out difficult tasks. Unlike the Western story, however, these are practical everyday chores which are handed out to both stepsisters. With help, Kongjwi only does a better job while Patjwi fails trying. If the story’s familiarity renders it amiable, its uniqueness gives it meaning. And, in a way, the story’s uniqueness has not been fully uncovered. This Korean folktale still has much to offer both as art and entertainment. *The series of old Korean tales has been made possible with the cooperation with Korea Magazine.