According to the Ministry of Health and Welfare, over 200,000 overseas patients came to Korea to receive treatment last year. Some 211,218 patients from 191 different countries underwent treatment at Korean hospitals in 2013, generating KRW 39.34 billion in sales, a 47 percent increase from the previous year.

The economic benefits did not stop there. International patients spent on average KRW 1.86 million won each, a 10.7 percent increase from the previous year and 1.8 times the average annual treatment costs of Koreans. Of those patients, 117 underwent treatments priced at KRW 100 million or more.

Perhaps unsurprisingly, given the country’s proximity, China accounted for the most foreign patients, with 56,075 coming in for treatment. The United States came in second with 32,750. Other major patient groups were Russians (24,026) and Japanese (16,849). Mongolia, Kazakhstan and Uzbekistan are also sending an increasing number of patients to Korea, in accordance with continuous government-to-government cooperation.

International patients revealed unique preferences, depending on their home country. For instance, patients from China, where Korean music and TV shows are quite popular, leaned toward cosmetic procedures, such as plastic surgery and skin care, although internal medicine procedures were also popular. Russians, on the other hand, made frequent use of internal medicine, general check-up and obstetrical/gynecological services, as well as skin care.

The biggest spenders, however, were Emiratis, who spent an average of KRW 17.71 million on each treatment, 9.5 times the national average. 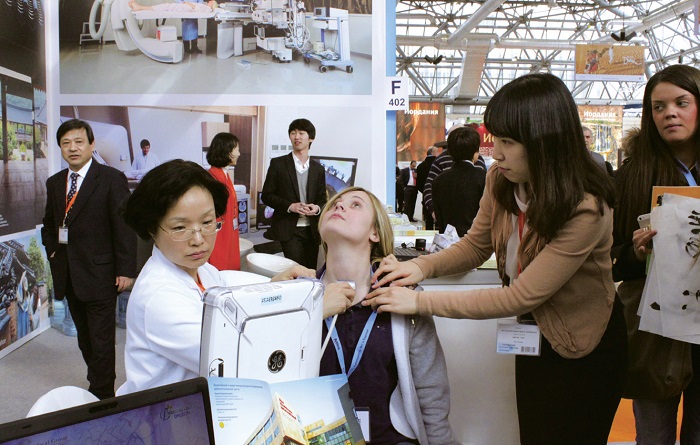 A Korean medical institution conducts a thyroid examination on a visitor at the 2013 Moscow International Travel & Tourism Exhibition. © Yonhap News

Since medical tourism was designated a new economic growth engine in 2009, over 630,000 international patients have chosen Korea as a medical services destination. In total, they’ve spent about KRW 1 trillion on treatments.

The year 2014 represents the ministry’s launch year for its “quantum jump” initiative to bring an annual 1 million international patients to Korea by 2020. Accordingly, it is strengthening intergovernmental collaboration with the provision of comprehensive support to medical institutions serving international patients. This includes focusing on systemic improvements, making efforts to expand services though government-to-government cooperation, promoting Korean medical services, inviting international medical personnel to study and conduct research in Korea, promoting medical volunteer efforts and developing integrated models to draw patients to Korea. It will also firm up existing infrastructure for international patients, the export of medical services and institutions overseas, and diversify the avenues available to international patients through such things as increasing the number of pre-post care centers. To promote a stable, ordered market, the government will also establish a tip center where scammed patients can alert the government of illegal practices, thereby boosting alliances with local governments and related institutions.