Kicked off on June 8, this year’s cycling competition hosts 200 cyclists from 20 countries. Gathered at Misari Regatta Park in Hanam, Gyeonggi-do (Gyeonggi Province), on the first day, the cyclists were eager to begin the eight-day race. 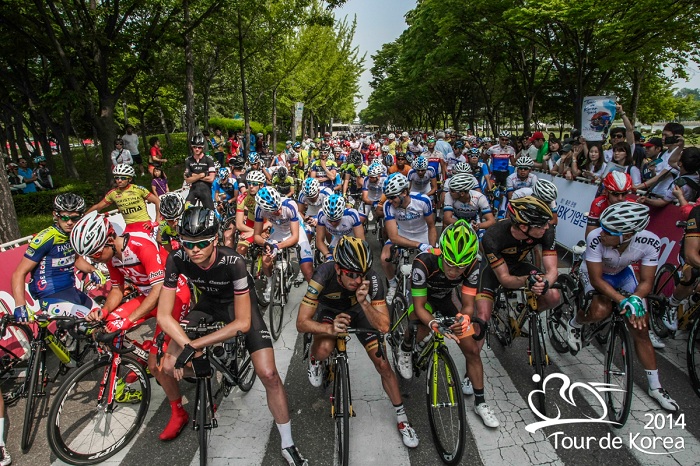 Participants in the 2014 Tour de Korea wait at the starting line on June 8 at Misari Regatta Park. (photo courtesy of the Korea Sports Promotion Foundation)

Marking its eighth year, this year’s race was upgraded by the Union Cycliste Internationale (UCI), cycling’s governing body, to the level of 2.1 from its previous level of 2.2. With the upgrade, more competitive cyclists have joined the event and spectator hopes are rising. Teams expected to put on a great show include the MTN-Qhubeka team from South Africa, winner of last year’s race, and the Drapac team from Australia, ranked third in a recent UCI World Tour, The Tour Down Under. 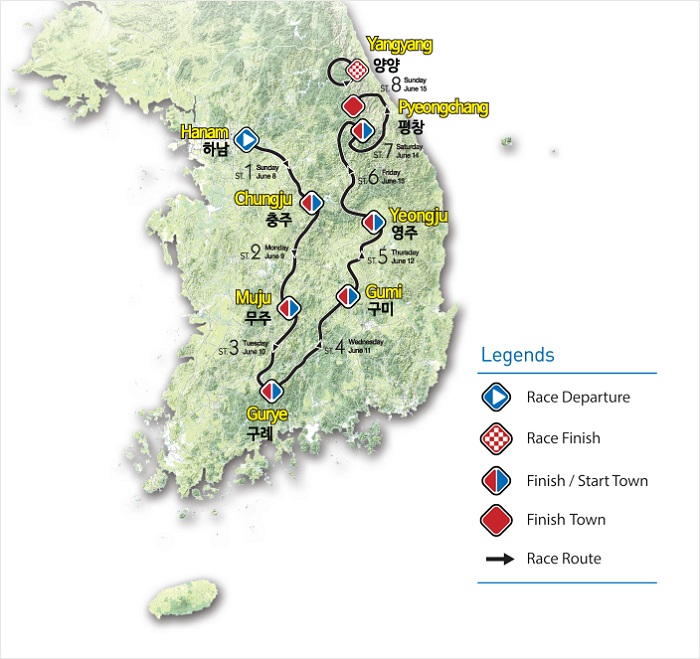 Starting just outside of Seoul on June 8, the cyclists will make a total of eight stops — Chungju, Muju, Gurye, Gumi, Yeongju, Pyeongchang and Yangyang — over the next eight days, pedaling through a total of 1,259 kilometers.

The first stage on June 8 was 137.2 kilometers, from Hanam to Chungju in Chungcheongbuk-do (North Chungcheong Province). The day was won by Bole Grega from Slovakia who recorded a time of 3 hours, 8 minutes and 47 seconds. Grega was followed by Van Der Ploeg Neil from Australia and Park Keonwoo from Korea. 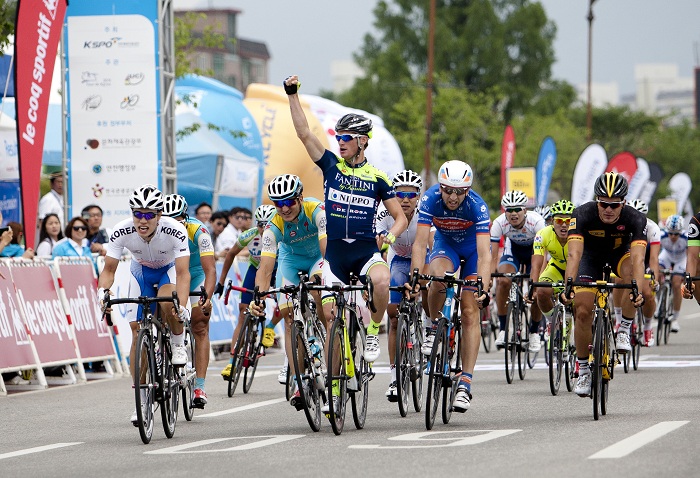 Bole Grega, raising his fist in the air, is triumphant in the first stage of the Tour de Korea 2014. (photo courtesy of the Korea Sports Promotion Foundation)

Stage two was 197.2 kilometers long and went from Chungju to Muju in Jeollabuk-do (North Jeolla Province). It was won by Handley Richard from the U.K. with a time of 4 hours, 52 minutes and 47 seconds. Park Sungbaek from Korea was second.

A participant in this year’s competition says that, “The race offers me a chance to experience each region’s culture and geography. It is also enjoyable to ride my bicycle through this route with the beautiful view.”

Stage four is the longest day, at 208.2 kilometers, running from Gurye to Gumi on June 11. The shortest day is stage eight, 82 kilometers, in Yangyang on June 15. Racers are offered the chance to visit eight provincial cities or counties and to taste the local delicacies.

The race wraps up on June 15 in Yangyang in Gangwon-do (Gangwon Province).

More information can be found at the Tour de Korea 2014 website.
https://tourdekorea.or.kr/tdk2014/elite/index.asp