Tongin Market draws tourists to the heart of Seoul

Tongin Market draws tourists to the heart of SeoulTraditional markets are the best place in Korea to experience the unique feeling of jeong, a special expression of fondness, warmth, bonding and attachment. Traditional markets across the nation have similar, but unique, characteristics, each with their own personality. The markets are more than just shopping places. You get a glimpse into the lives of ordinary people as you walk through the arched alleyways; you get a glimpse into Korea’s soul. 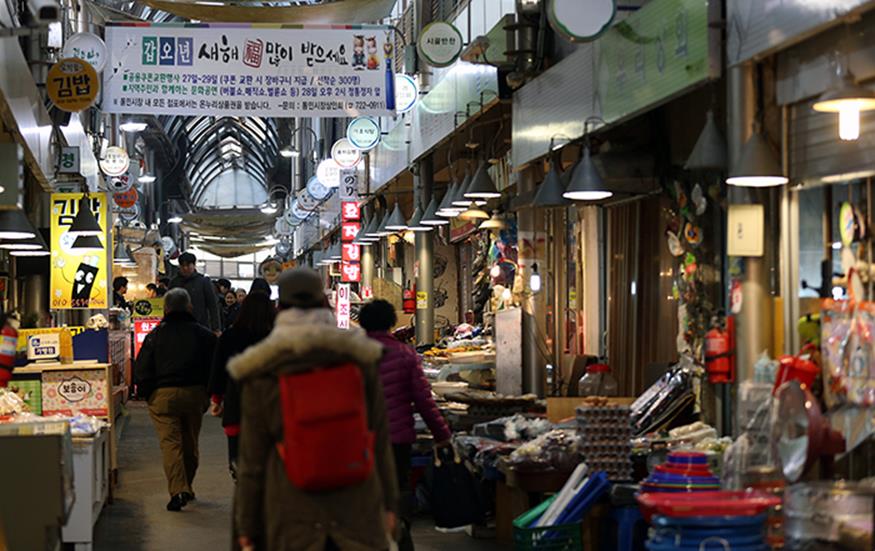 Tongin Market is a traditional market with many small stores squeezed between the alleyways of Seochon in central Seoul. (photo: Jeon Han) 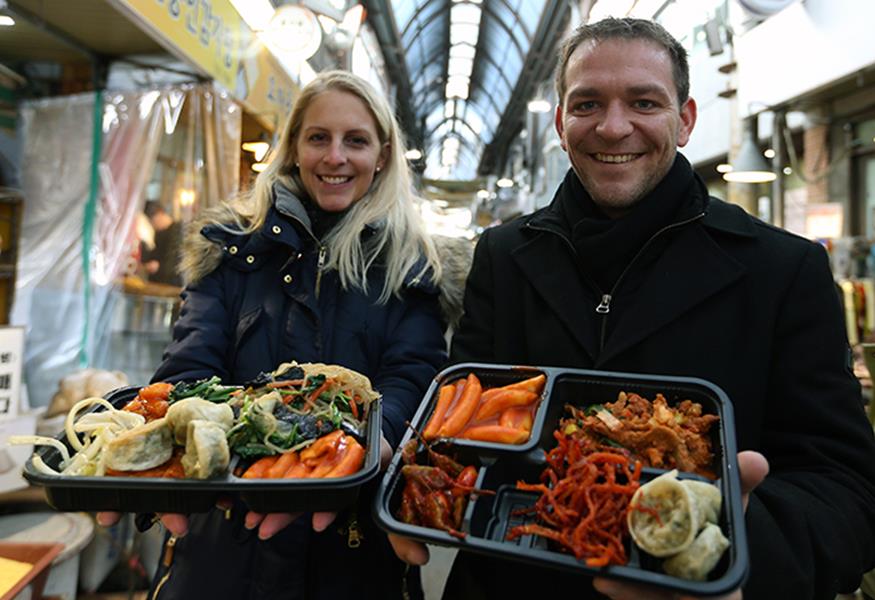 A German couple shows off their lunch trays, stuffed to the brim with delicacies they bought with their yeopjeon tokens at the Dosirak Café on February 20 at Tongin Market. (photo: Jeon Han)

This “market of the people” is not a large, major traditional market, like Namdaemun Market, Dongdaemun Market or Gwangjang Market, nor does it specialize in certain products, like Gyeongdong Yakryeong Market, known for dealing in Oriental medicinal products, or Jagalchi Market, the fish market in Busan.  Tongin Market allows its neighbors to easily obtain almost everything they need, whatever they want, and also provides them a place to indulge in both culinary and shopping delights.  One of the most popular destinations here, despite not having a long history, is a small do-it-yourself eatery known as the Dosirak Café, or the “Lunchbox Café.” People buy KRW 500 tokens that look like traditional coins,yeopjeon, and with the coins buy any one of an assortment of delicacies on sale at nearby stores. They choose their meal from a range of traditional street food retailers, loading up their empty tray and then eating in the café. This is the only known traditional market that’s home to such a restaurant, and it’s popular with a whole range of visitors, tourists and locals alike. 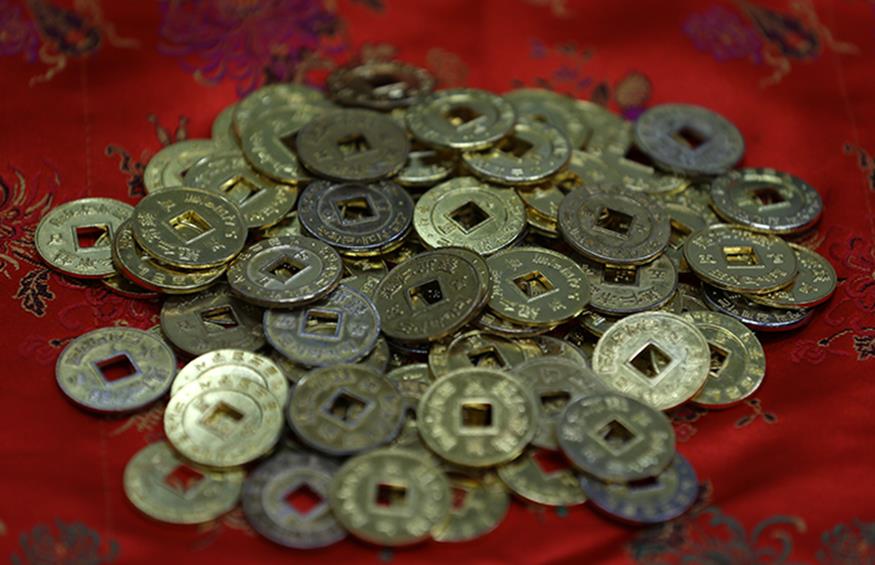 Visitors use yeopjeon tokens, worth KRW 500 each, to buy their lunch and side dishes at the Dosirak Café. (photo: Jeon Han) 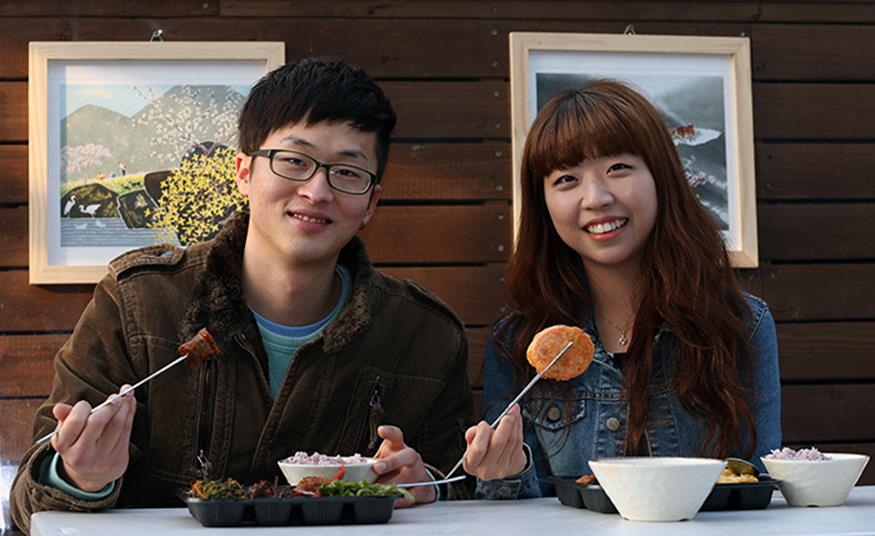 Kim Sun-hyung (left) and Kim Dream, both college students, come from Incheon to eat at the popular do-it-yourself Dosirak Café in Tongin Market on February 20. The pair smiles as they show off their chosen meal. The popularity of do-it-yourself lunches is spreading to other traditional markets across the country. (photo: Jeon Han)

On February 20, two college students stormed into the café just 40 minutes before its lunch hour ended, begging the café owner to let them in. They promised to finish up their lunch in the remaining minutes.  “We traveled here from Incheon just to eat in this restaurant,” said Kim Sun-hyung and Kim Dream. “We heard about the Dosirak Café while surfing the Internet. We were amazed it was so popular,” said the male student. “It really tastes great and gives us a wonderful experience to look around and choose whatever we want to eat.”  Strictly speaking, the Dosirak Café is not the only unique aspect to the market.  People can’t say that they’ve fully enjoyed the market without tasting tteokbokki, a style of rice cake seasoned with red pepper paste. Tongin tteokbokki, however, has something different, a style of serving that its other, ordinarytteokbokki siblings don’t have. It is stir-fried in oil and comes in two flavors: one, just fried in oil; the other, fried in oil with a special spicy sauce. The rice cake street delicacy is believed to have been around since the outbreak of the Korean War (1950-53). 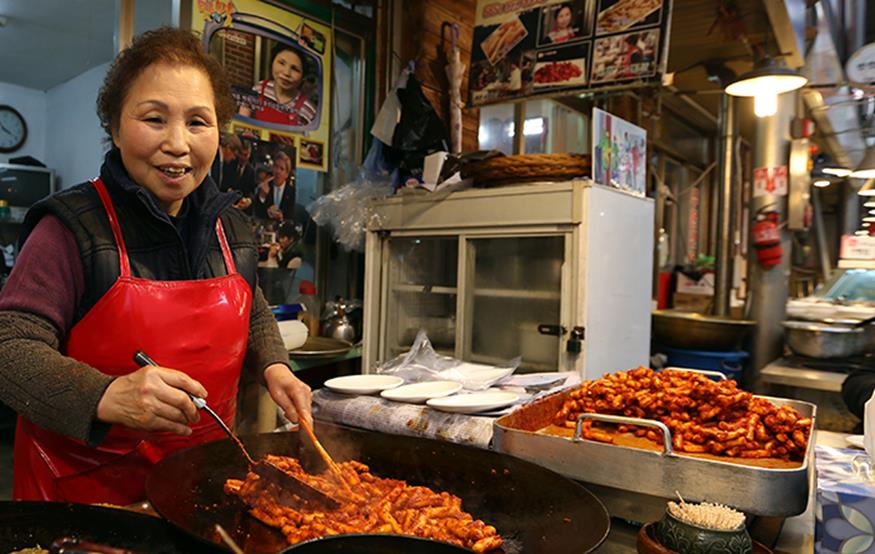 Street vendor Jung Weol-soon has been making tteokbokki stir-fried in oil, a specialty of Tongin Market, for 29 years. When told by some of her friends to put on make-up for the photo, she replied, “It doesn’t matter how I look. It only matters how it tastes.” (photo: Jeon Han) 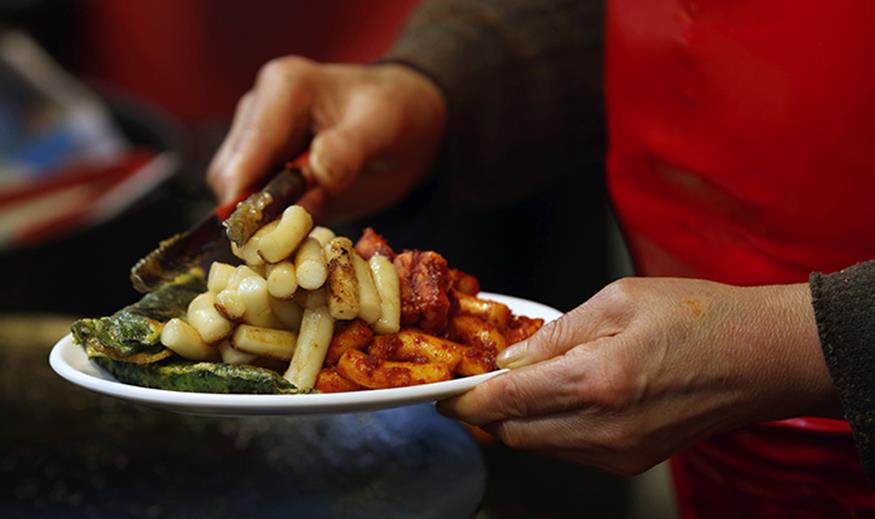 Even U.S. Secretary of State John Kerry couldn’t miss out on Tongin tteokbokki while on his official visit to Korea on February 13. Seoul was the first stop on his Asian tour last month.  “I am not sure exactly when oil-fried tteokbokki appeared, but it has been already 29 years since I started serving the dish here,” said street vendor Jung Weol-soon. “It is believed that it started when one quiet, old woman fried sliced rice cake in oil and sold it in one of the far corners of the market, on the heels of the outbreak of the Korean War.” 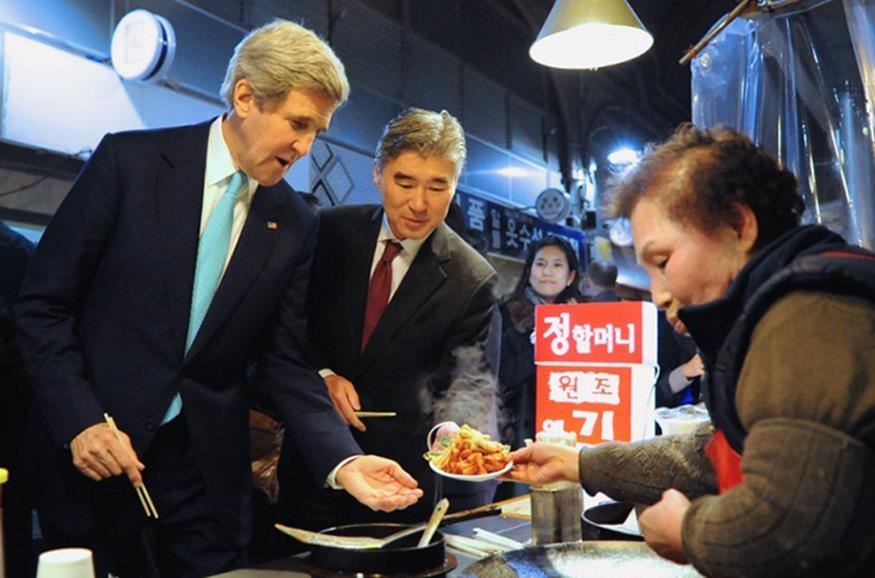 Tongin tteokbokki also appeared in Lee Seung-gi’s 2012 music video for his song, “Invitation to Me.” Since its appearance there, the restaurant has become a popular spot for Lee’s fans.  “Last year, more than 150 of the singer’s fans gathered here and held a birthday party for him,” the owner remembered. “Back in November last year, also, about 200 fans came to taste my tteokbokki after Lee’s concert.” According to the market manager, the Dosirak Café was visited by more than 97,000 people last year, averaging 300 visits per day on weekdays and 700 to 800 visits per day on weekends.  The greatest merit of Tongin Market, the manager said, is that there are many tourist attractions nearby for visitors to see.  By Jeon Han, Sohn JiAe Korea.net Staff Writers

The view of downtown Seoul from atop one of buildings in Tongin Market. The traditional market is surrounded by many tourist spots, including Gyeongbokgung Palace and the neighborhood of Seochon, representing the city in all its many colors. (photo: Jeon Han)