This is the sixth part of our “Food Tourism” series. Today, we introduce our readers to the local delicacies and to the culinary history of Jeollanam-do (South Jeolla Province). Click here to see the previous post about Jeollabuk-do (North Jeolla Province). Located in the southwestern part of the peninsula, Jeollanam-do is known as Korea’s breadbasket. It has been said that, starting in their distant past, the Korean people would not have been able to have come into being had it not been for the food produced in this region. The region benefits from being home to the Seomjingang River and the Yeongsangang River. Thanks to the two rivers, Jeollanam-do has plenty of water and fertile soil. Also, the Plains of Naju, about half way down the length of the Yeongsangang River, flowing in the northwestern part of the province, is home to the nation’s most fertile region, producing the largest amount of grain and food. 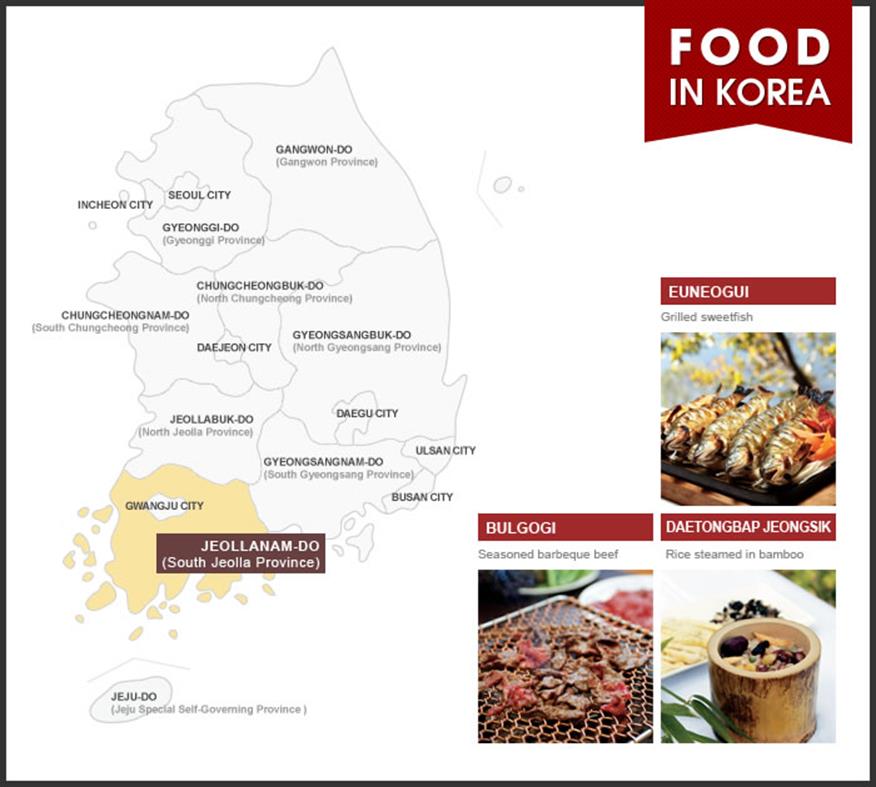 Jeollanam-do in the past was called the Sambaek region, meaning that it produces massive quantities of three white things: rice, cotton and cocoons. In addition to these, agriculture is quite active in the region, too. A variety of products—barley, sweet potatoes, onions, pears, peaches, grapes, persimmons, apples and other fruits and vegetables—are cultivated here and shipped nationwide. The region’s fertile soil and warm temperatures are good for rice farming, as well. On an annual basis, Jeollanam-do produces an average of 50,000 tons of rice. Due to its location at relatively lower latitudes, Jeollanam-do is hot and humid in the summer and cold and dry in the winter. Across the southern regions of the country, the average temperature lingers at around 14 degrees Celsius, about two or three degrees higher than the rest of the peninsula.

The aforementioned geographical factors—fertile soil, a warm climate and close proximity to the sea—have brought the region abundant crops, seafood, vegetables and wild herbs. With a variety of ingredients available, people of the province tend to show great passion for and efforts in preparing their food. They have produced a unique cuisine and have showed great interest in creating various types of condiments, such as salted anchovies. Here, we introduce our readers to three must-eat delicacies of Jeollanam-do. 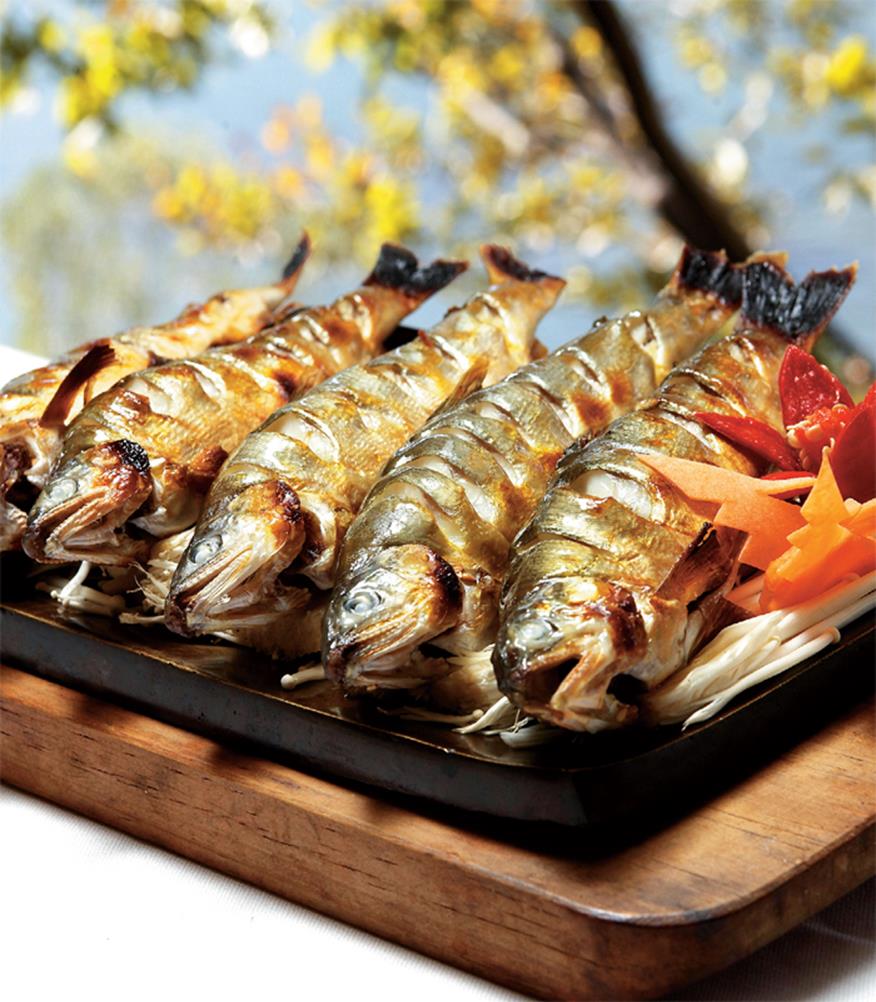 Euneogui, a dish of grilled sweetfish, comes from Gokseong along the banks of the Seomjingang River. There is an interesting story about the dish that has been handed down through time. It is said that the women of Gokseong were jealous of the fish for their beautiful, glittering silvery color, their slim bodies and their red lips. Behind the supposed jealousness, however, there is more to the story. Every spring and summer, when the sweetfish are in season, the nearby Seomjingang River becomes a silvery ocean with millions of them swimming upstream to spawn. The men of the village gather in the river, armed with nets or bamboo spears, to catch them. They stay all day along the riverside, eating filleted raw fish accompanied with some drinks, and come home late at night. Seeing their husbands so absorbed in their fishing, the women became upset. The women chastise their husbands for being out so long, but, on the other hand, they enjoyed eating the remnants of the sweetfish that were brought home. The wives added their own touch to the fish to make an even tastier dish. One of the most popular recipes has the fish grilled, after being gutted, and filled with crushed garlic, chilies, ginger, pepper and sesame. 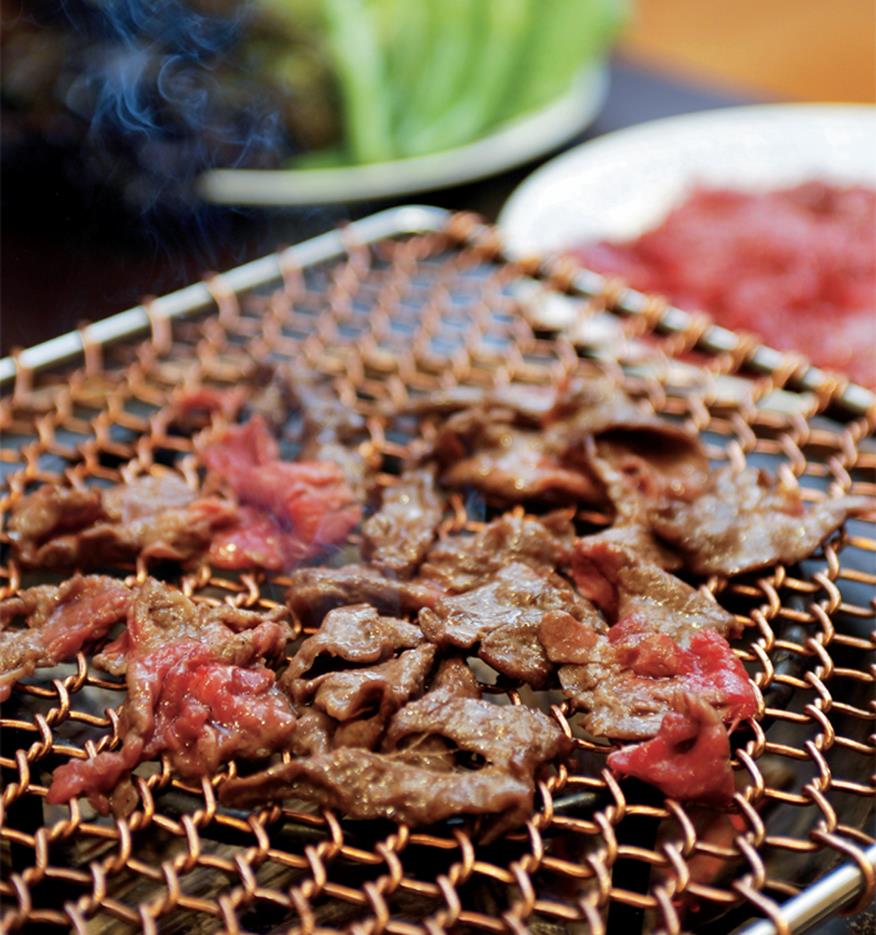 Our second dish takes us from the rivers to the pastures. After the Korean War, the country was desperately poor and beef, a luxury at the time, was only consumed on special occasions or during festivals. As it was for the whole country, this was also true for Jeollanam-do. On festival days, people who could not afford to eat a whole side of beef purchased only a handful of the cheapest cuts and used that to show off their culinary skills. After many attempts, a new type of “fire meat,” or bulgogi, was born. The people of Gwangyang sliced their beef very thinly to make it less tough. They invented a sweet savory sauce to go with the meat. The sauce was brushed onto the meat immediately before grilling it over oak charcoal. The beef taste was spiced up with the scent of the grill. The awe-inspiring taste of Gwangyang bulgogi went viral, so to speak, inspiring a series of restaurants to this day. According to many connoisseurs, Gwangyang bulgogi should be grilled in a manner so that the scent of the grill lingers and is as strong as possible. It is important to put only a small amount of meat onto the grill and to spread it as widely as possible. It should only be slightly grilled, only to the point where the red color is barely gone. After grilling, the bulgogi restaurants in Gwangyang offer a boiling stew with the remainders, and with kimchi and side dishes added to the meat broth. You can only taste such a delicacy in Gwangyang.