Myeoncheon dugyeonju, an azalea liquor from Myeoncheon, was a seasonal drink that households across the country made in spring when the azalea flowers bloomed. Compared to Gyeongju gyodong beopju which was transmitted as a family secret, the azalea liquor from Myeoncheon has a longer history and a broader consumer base. The history of the flower-based liquor can be traced back to almost 1,200 years ago, suggesting that home brewing by private families already existed around that time. As the most representative gahyangju, Myeoncheon dugyeonju is made through a unique brewing method using flower petals. No example of this is known in any other country.

The origin of Myeoncheon dugyeonju is told in a story related to the founding of the Goryeo Dynasty (918-1392). According to the story, the azalea concoction was made by the daughter of one of the generals who put the first Goryeo king on the throne, for the purposes of curing her ailing father. When the father, Bok Ji-gyeom, suffered from an unknown illness, he went to Myeoncheon, his hometown, to recuperate, with his 17-year-old daughter Yeong-rang. For 100 days she ceaselessly prayed for his recovery at Mt. Amisan. Then one day in her dreams she received an oracle from a deity. The god said her father would recover from his severe illness if he were to drink a liquor aged for 100 days and made from glutinous rice and the azalea petals that bloom on Mt. Amisan. The deity added that the water used for brewing should come from the Ansaem Spring and that two ginkgo trees should be planted nearby for prayers. When Yeong-rang brewed the liquor, following the deity’s strict directions, and offered it to her father, Bok Ji-gyeom immediately recovered. From then on, Myeoncheon dugyeonju has been called a medicinal liquor, one made by a daughter with strong filial piety to save her father’s life. The liquor-making method and major ingredients are specified in the story.

The locations in this story still exist in Myeoncheon. The Ansaem Spring is located in Seongsang-ri, Myeoncheon-myeon, Dangjin, South Chungcheong Province. The spring maintains a temperature of 14 to 15 degrees Celsius year-round, always providing perfect brewing water. Mt. Amisan, which the daughter Yeong-rang climbed regularly to pray, tops out at 349.5 meters above sea level, the highest mountain in Dangjin. It straddles today’s administrative boundaries of Myeoncheon-myeon and Sunseong-myeon. In the spring, azaleas still bloom in profusion on Mt. Amisan.

After being transmitted in and around Myeoncheon-myeon for a long time, the brewing skills for Myeoncheon dugyeonju were designated as an Important Intangible Cultural Heritage item in 1986. The first master was Park Seung-gyu, whose family has been making Myeoncheon dugyeonju for four generations. Upon his death in 2001, the production and sale of the azalea liquor was temporarily halted. 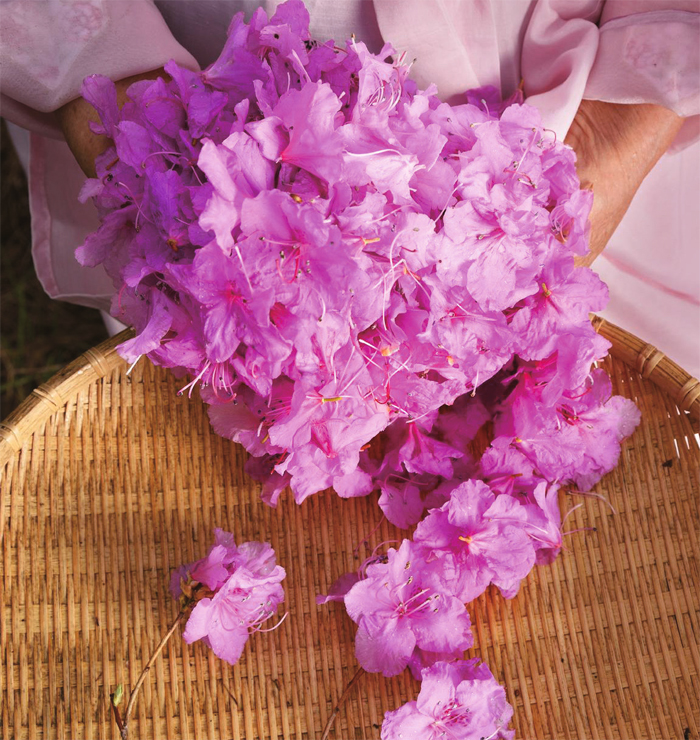 In March 2003, the Cultural Heritage Administration embarked on an effort to form an association of azalea liquor brewers in the Myeoncheon area. Eight exemplary brewers and 16 individuals were selected through nomination, and a standardized procedure to make the azalea liquor was established. Accordingly, a safeguarding association for azalea liquor was set up in October 2004. The association has been given the responsibility to manage and transmit the relevant skills of the individual masters. Making an alcoholic beverage using azalea flowers has now taken root as a tradition in the Myeoncheon area, a rare example where an entire town has been transmitting the practice of making and enjoying one alcoholic drink. Myeoncheon dugyeonju was originally started by one family and then spread throughout the area. It is now established as the representative local liquor for Myeoncheon. 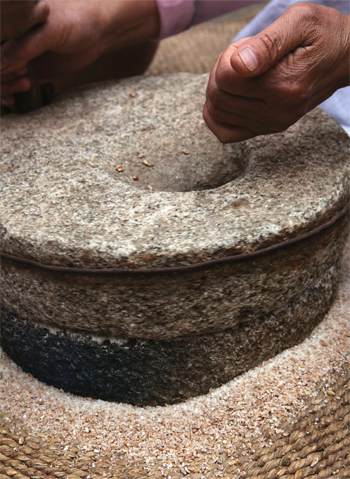 Whole grain wheat is ground in a millstone.

Myeoncheon dugyeonju is made the same way as cheongju, but with the addition of azalea flowers. The brewing process is similar to that of Gyeongju gyodong beopju, but with key differences in the ingredients used: brewing water is drawn from the Ansaem Spring and azalea flowers are, of course, added.

In the spring when the azaleas bloom, azalea flowers are plucked from Mt. Amisan. The poisonous stamens and pistils are immediately removed and the flowers are dried in a shady and windy place. Dried azalea petals are stored in a paper bag and taken out bit by bit, as needed. The azalea flowers were originally not washed, but these days every petal is rinsed in flowing water to remove dust and pesticide residue.

Whole-grain wheat flour is mixed with water from the Ansaem Spring to make a nuruk dough which is then pressed in a frame. The shaped nuruk is buried under rice straw for two to three days until a yellowish fungi is fully grown. The germinated nuruk is dried under the sun for several days to be ready as an ingredient for the azalea liquor.

One day before making the primary mash, a jar is readied. The jar is cleaned thoroughly, dried and sterilized by the smoke of some burning wormwood.

Godubap is mixed with nuruk to make the primary mash. Cleaned glutinous rice is soaked in water for eight hours and then rinsed and drained. The rice is cooked in a steamer for one hour and the hard-cooked rice is scattered on a wrapping cloth to cool down to 15 or 18 degrees Celsius.

To make the primary mash, 2.4 kilograms of glutinous rice is blended with 2 liters of water and 2.6 kilograms of nuruk. 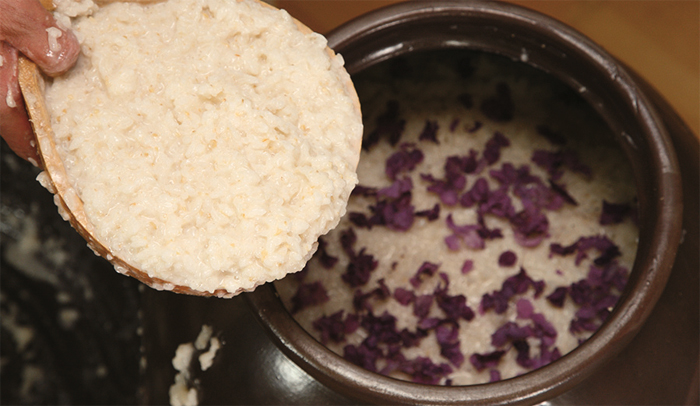 The primary mash is layered by azalea petals.

Azalea petals are laid on the bottom of a jar and the mixture of rice, water, and nuruk is added. A layer of azalea flowers is then placed on top, too. The jar is placed in a breezy spot for a fermentation period of two to three days. One week later, when the temperature inside the jar rises to 40 degrees Celsius, it is time to make the secondary mash. The primary mash is mixed with godubap to make the secondary mash.

The jar is covered with a hemp or cotton cloth and a lid. The secondary mash is fermented for five to seven days and then moved to a breezy place for further fermentation for 75 days. When the fermentation process is done, a yongsu sifter is planted in the mash to extract the clean rice wine which is then additionally aged for 14 days before consumption.

The mountains and fields of Korea are covered in pink when azaleas come into bloom every spring. At this time of the year, people go on picnics to enjoy the azalea blossoms. They make flowery ornaments with bunches of azaleas and eat azalea cakes. The azalea is an edible flower used for a variety of dishes, but using it to make liquor is the best way to appreciate the flower’s fragrance.

Up until 30 years ago, azalea liquors were made all across the country but with slightly different brewing methods in each household. The tipple was enjoyed by people from all walks of life. Myeoncheon in South Chungcheong Province was particularly renowned for its flowery alcohol. Transmitted down through to the present, azalea liquor from Myeoncheon uses glutinous rice as its starch source and undergoes two fermentations, with nuruk added during each fermentation. It takes about 100 days to brew Myeoncheon dugyeonju: a relatively short period of seven days to ferment the primary mash, a longer time of 75 days to ferment the secondary mash and 14 days of aging before drinking the liquor. Myeoncheon dugyeonju has a mysterious, light-yellowish color and a deep, profound fragrance. With a relatively high alcohol content of 18 percent, the azalea liquor has a subtle tasty flavor. Glutinous rice, used as the main ingredient, gives it a starchy texture, good for the palate. It is known that the azalea liquor relieves such symptoms as a runny nose, nerve spasms, back pain and fatigue. It was recently scientifically proven that the azalea extract or concentrate created during the fermentation process has medicinal effects that help to maintain good health.