Alcohol in Korean life 2 – The Many Kinds of Sul

According to the way in which fermented beverages are filtered, they are divided into choengju, clear rice liquor, and takju, thick rice beers. When cheongju or takju are distilled, soju, a distilled spirit, is produced. 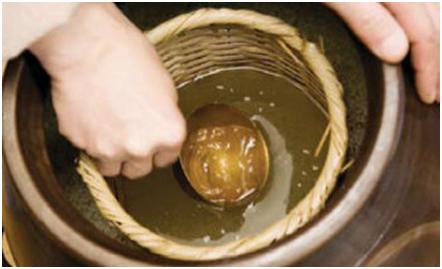 Cheongju, clear rice wine made by filtering the fermented mash

A clear rice liquorCheongju refers to a clear rice liquor produced by filtering the fermented mash with a view to achieving a better taste and fragrance. More than one thousand varieties of cheongju were produced during the Joseon Dynasty, the heyday of traditional liquor culture. Rice is the main starch used for cheongju, which comes in a variety of flavors and fragrances according to the proportion and preparation of the rice.

Takju refers to cloudy rice beer, in contrast to the clear cheongju. Takju is typically made within 10 days after only one fermentation. To make high-grade takju, the fermented mash is first filtered to produce cheongju and then is squeezed through a sifter to produce a cloudy liquid. Makgeolli, a type of takju, is made by diluting the fermented mash with water without prior filtering. The word makgeolli means, “sifted right before,” or, “roughly sifted.” Makgeolli refers to any kind of liquor made from leftover alcohol mash which was already filtered and then diluted with water. Renowned for its sweet and refreshing taste, makgeolli is popularly consumed by farmers to quench their thirst after an exhausting day in the field.

The method of making soju was learned from Mongol invaders who build their encampments in Kaesong, Andong and on Jeju Island during the late Goryeo period. The Mongolians enjoyed intoxicating liquors made by distillation and gave the idea to someone to create soju, another distilled spirit. Afterwards, the areas where Mongolian soldiers were based became popular destinations for soju drinking. The new term sojudo was coined to refer to groups of soju lovers. Fermented alcoholic beverages are heated in a still to extract a clear alcoholic liquid. Colorless, soju’s pungent taste supposedly comes from the “volcanic” elements in the soil. Each area of the country produces soju at a different time of the year. The southern regions made soju in the summer, when brewing was difficult. The central regions of the country made soju mostly from May to October and the northern reaches of the peninsula made the spirit alcohol year-round.

Sokseonju is an alcoholic beverage produced via an accelerated brewing process that takes only one to 10 days. For unexpected occasions, such as the sudden arrival of a guest or a death in the family, households would make sokseonju to serve to a large crowd of gatherers. Since alcoholic beverages were an essential element of hospitality and ritual, sokseongju was brewed as a stopgap measure when other liquors could not be made in time or when an earlier batch went bad. 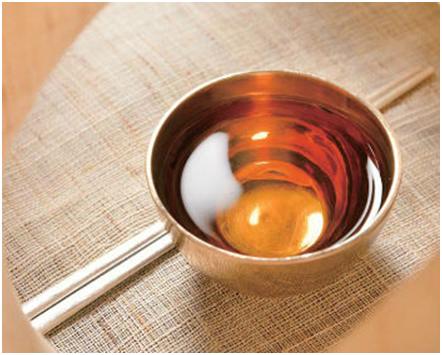 Sokseonju is fermented at a warm temperature for up to 10 days. When it is needed in less than three days, nuruk is dissolved into the water to help with a faster fermentation process. Sokseonju has a short shelf life but has a pretty good taste for only having been prepared one or two days ago.

Gahyangju is made with the addition of seasonal flowers or fruit. Spring flowers such as azaleas and forsythias are used in the spring. Roses, peppermint and irises are popular in the summer. Fragrant fruit, such as citrons and tangerines, are added in the autumn. Half-opened buds of the plum flower are floated on the surface of a liquor in the winter season. Flowers, leaves and fruit peels were the most popular ingredients for making gahyangju. Half-opened flower buds are collected, washed in a flowing stream and dried until crisp in the airy shade for two or three days. When they are soft and tender, aromatic leaves such as peppermints, are collected and prepared in the same manner as the flowers. Fruits with zesty fragrances, such as citrons and tangerines are thoroughly cleaned and their rinds are used to make gahyangju.

Yakyong yakju is an alcoholic beverage made with supposedly medicinal materials, such as roots or tree bark. Alcohol was believed to be the best drug in Oriental medicine and yakyong yakju was believed to be a tonic the would help prevent or treat disease. Plant material was boiled to produce a medicinal extract which was then mixed together with other ingredients during the brewing process. There is a diverse range of medicinal ingredients, such as pine needles, bamboo leaves and ginseng root, though only one of them was used at a time. Ingredients believed to boost one’s stamina, or materials deemed good for the hair or the skin, were the most popular.

Honseongju is made from a distilled spirit that has been flavored with fruit or medicinal herbs and then bottled with extra sugar or seasoning. It is a liqueur, to be sipped. Making honseongju overcomes the constraints of temperature or climate and can be easily prepared over a short period of time, allowing for a diverse range of flavors depending on which additives are put into the bottles. It is easy to extract supposed medicinal properties from herbs when making such a drink and therefore honseongju was sometimes made for the prolonged storage of medicinal herbs.

Honyangju is an alcoholic beverage made by mixing a fermented liquor and a distilled spirit. However, honyangju is somewhat different from either fortified wine, which is wine mixed with brandy, or sake, which is cheongju mixed with soju. To make honyangju, soju is added to a fermented liquor made from rice and nuruk. The mixture is then fermented again. Honyangju has the advantage of being both brewed and distilled. It is rich in taste and scent and has a long shelf life. 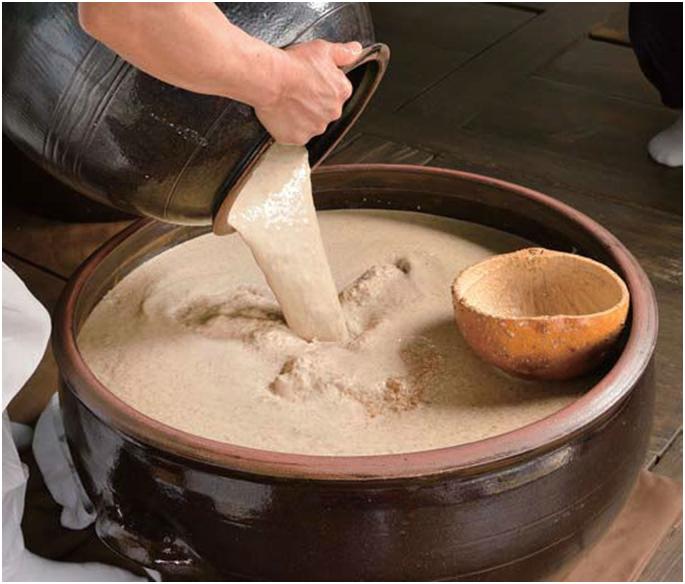 Iyangju is an alcoholic beverage made by the combination of five other drinks: wasongju, made in a big slanted pine log; juktongju, brewed inside the hollow stem of a bamboo stem; jiju, made in a jar buried deep underground; cheongseoju, brewed in a jar steeped in cold water; and, sinseonbyeokdochun, made in a hollowed pine log cut into the shape of a jar.

Sul Types by the Number of Fermentations

Flavors, scents and alcohol content are determined by the number of times a drink undergoes fermentation. An alcoholic beverage fresh out of the first fermentation smells of nuruk fungi. Multiple fermentations, however, endow it with a fruity and flowery fragrance, which also raises the alcoholic content and its shelf life.

Danyangju is an alcoholic beverage that has only been fermented once. Compared to drinks that have been fermented multiple times, danyangju has a weaker taste and a weaker scent, but it is more cost-friendly and was widely enjoyed by commoners. With a low alcohol content, danyangju has a shorter shelf life and should be consumed within a short period of time.

Iyangju is an alcoholic beverage that has been fermented twice. The primary mash consists of nuruk and grains which come in a diverse range of forms: porridge, steamed rice cake, dough nut rice cake, boiled rice cake and undercooked porridge. The secondary mash is hard-cooked rice or steamed rice cake, sometimes with the addition of hard nuruk or watery nuruk. Barley malt or wheat powder are also sometimes added to the primary or secondary mash. Itangju is classified into two types, based on the number of days of fermentation of both the primary and secondary mash. There are those fermented for less than 10 days and those that were fermented for more than 10 days.

Samyangju is an alcoholic beverage that has been fermented three times. The more times a liquor is fermented, the higher the alcohol content. Samyangju has a clear and mellow golden color, along with a soft and deep fragrance, sometimes described as being fruity or flowery. Beyond this, there are even more exquisite liquors that have been fermented four or five times.

Sul Types by Ingredients for the Primary Mash

Juk is ground cereal that has been boiled in water until thick. It is mainly used to make the primary mash for making alcoholic beverages fermented at low temperatures. Juk is used as the source of starch for the primary mash, yielding large quantities of sul with a clear color.

Gumeongddeok is a doughnut-shaped rice cake made of rice flour and kneaded with hot water. The sul gotten when gumeongddeok is used in the primary mash is small, but has an excellent taste and appealing fragrance. It is also blessed with a long shelf life. Gumeongddeok was mainly used by people of wealth and in the nobility.

Gaeddeok is an unattractive looking lump of rice cake. Making gaeddeok requires a great deal of time and effort. The rice powder is first steamed and then pounded with a mortar and pestle, eventually shaped into flattened cakes. It is then steamed again. Laboriously made, gaeddeok yields a great tasting, pleasantly scented alcoholic beverage. 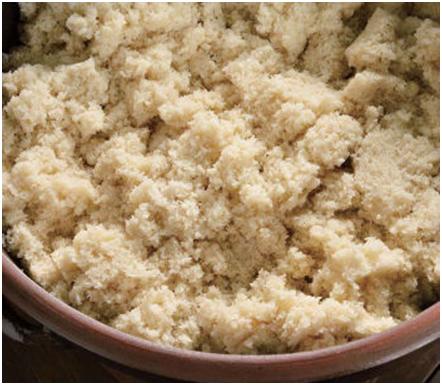 Godubap, a hard-cooked riceGodubap consists of rice cooked in a steamer with a minimal amount of water. When using godubap, there is no need to pound the grain into a flour. This makes the whole process simpler. Godubap produces a clear liquor with a high alcohol content. It is commonly described as being very intoxicating with an unpleasant scent. Godubap is widely used to make either danyangju or sokseongju, liquors made with a single, short fermentation.

Baekseolgi is a white steamed rice cake made of rice powder mixed with water and sugar. Baekseolgi is widely used to make alcoholic beverages, endowing them with tasty and subtle flavors.

Injeolmi is made from steamed rice pounded into hard with a mortar and pestle. Chewy and good for the digestion, injeolmi gives a tasty flavor and helps with fermentation when used to make liquor. The process of making injeolmi, however, is complicated, preventing its widespread use in the primary mash.

Beombeok is undercooked porridge made of grain powder mixed with hot water and brought to a boil. Beombeok ensures a high alcohol content and a pleasant scent in the final product. Beombeok is undercooked and therefore prone to contamination with bacteria. It needs a long fermentation time. When using beombeok for brewing, quality nuruk should be used to make up for these disadvantages.

Mulsongpyeon comprises of lumps of rice dough torn by hand and boiled, shaped somewhat like gumeongddeok crossed with gaeddeok. While known to provide its liquor with good color and fragrance, mulsongpyeon also produces a very small yield and is cumbersome to make. Mulsongpyeon is not popular for making alcoholic beverages.