You’ve probably noticed Seoul’s buses in the streets driving alongside taxis and other vehicles. Korea’s buses move through well-developed routes, and the bus fare is cheap, making it a convenient form of transportation. Also, there are pockets of neighborhoods that buses travel to that are not always conveniently located to subway exits, so sometimes taking the bus is the best choice of transportation. In 2005, Seoul revised its bus route system by distinguishing different buses by using different colors. Also, most bus stops have been relocated to the middle of the road to lessen traffic congestion. However, as a foreign tourist in Seoul, the mere idea of getting on the bus may be a little intimidating. Nonetheless, it is quite an advantageous means of travel that you should become familiar with, so here is an introduction to the Seoul bus system. 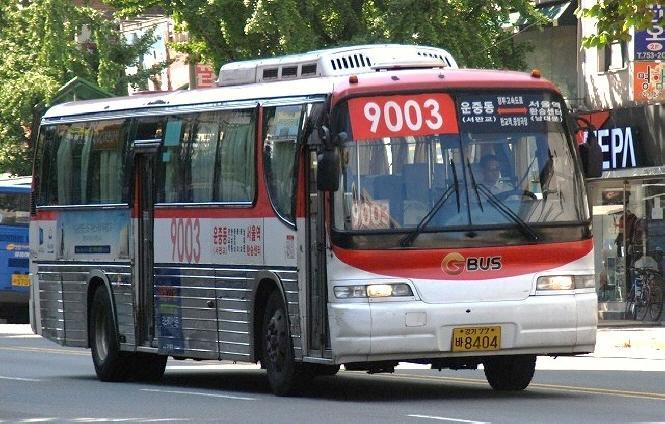 ※ If you use a T-money card on the bus, you get a 100 won discount on each ride. However, keep in mind that foreign tourists who are children cannot receive a children’s discount.

※ Children ages 5 and under can ride for free. (Up to 3 children allowed per adult.)
※ If you use your T-money card, transfers are free.
※ The stated fares are basic fares that cover up to 10 km; after that, the cost is an additional 100 won per 5 km. Also, you can transfer up to 5 times for free (make sure to transfer within 30 minutes of scanning your T-money card).

・Find 『i Tour Seoul』’s bus route search here.
(You can pick your point of departure and destination on the map, and it’ll show you the best route, price, and amount of time required for travel. You can also choose to take a combination of transportation options, such as the subway plus the bus, etc.)

How to Ride the Bus 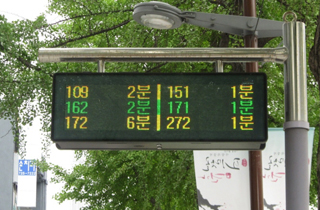 1. City Bus Wait at the bus stop.At each bus stop you’ll find bus routes in Hangeul, but not necessarily in English. (It may be a good idea to take notes in Hangeul before you try to get on the bus, so that you have the names of your destinations in Korean.) You’ll also usually find the bus timetables at the bus stop. Depending on the route, the buses usually come every 5-15 minutes.

It is also a good idea to learn the Korean phrase, “___ ga-yo?” which means, “Does this bus go to ?” Or you can say, “ gab-ni-da?” which means the same thing but is a more polite way of asking the question. Some bus stops have been fitted with LED boards that show how many minutes away each bus is from approaching. 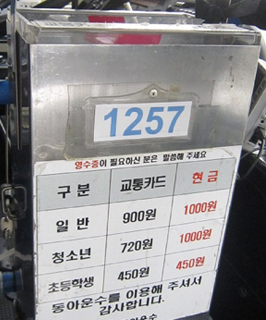 2．Getting on the bus / paying your fare

Get on the bus using the front door, and pay your fare by either scanning your T-money card or paying in cash. While you can pay your fare in coins, you cannot pay using bigger bills like a 5,000 won, 10,000 won or higher. If you’re not using T-money or don’t have your card on you, take out a 1,000 won bill and get ready to pay with that.

It is also a good idea to learn the Korean phrase, “___ ga-yo?” which means, “Does this bus go to ?” Or you can say, “ gab-ni-da?” which means the same thing but is a more polite way of asking the question. Some bus stops have been fitted with LED boards that show how many minutes away each bus is from approaching.

3．Press the buzzer to get off

When the bus is approaching the stop at which you’d like to get off, hit one of the buzzers. Most of the time, the next stop will be announced on the intercom in both Korean and English. 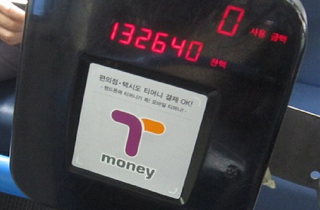 When the bus is approaching your stop, it’s a good idea to get out of your seat and get ready to get off the bus. Sometimes everyone gets off the bus so quickly that it’s possible that you you may not get off quickly enough before the door closes. It’s also possible that it’s so crowded that the driver thinks everyone who needs to get off has done so. If for some reason the driver does shut the back door before you can get off, just shout, “Naeryeo-yo!” which means, “I’m getting off!”

The long-distance buses travels the furthest of all the buses. Compared to the railway and other modes of transportation, taking the bus is the cheapest way to travel the farthest in Korea. But be careful on weekends and on holidays such as Chuseok (Korean Thanksgiving) and New Year’s, when road congestion is so bad that it’ll take much longer than usual to reach your destination.

● Inter-city bus
This is a long distance bus that only makes stop in each city, but not in between. 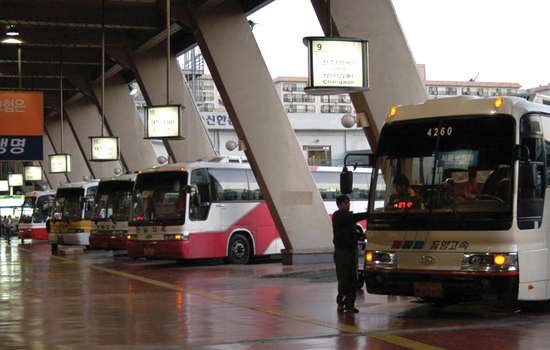 1．Getting to the bus terminal

Choose the bus terminal that’s best for you depending on your destination. Seoul’s main bus terminals are as follows:
※ Bus Terminal phone information and website are in Korean.

Depending on your destination, your ticket may be sold in a different place than other tickets. You can ask someone to guide you to the right ticket booth by telling them your destination. While you’re purchasing your ticket, remember to ask the attendant your bus platform number, so you know where to get on.

When it’s not your bus’s departure time, you’ll notice that there is a different bus parked at the same platform. Each bus’s departure time and destination is posted in its front window, so be sure to double-check that information. When you get on the bus, give half the ticket to the driver and keep the other part for yourself. Remember to fasten your seatbelt when the bus starts moving.

The bus will make several stops as you approach the final destination, so make sure you know exactly where to get off. In fact, when you get on the bus, it’s a good idea to tell the bus driver, “___ ae-seo nae-ri-go sip-eo-yo,” which means, “I want to get off at ___.” And to make sure you’re getting off at the right stop, you can say, “Yeo-gi-ga ___ ae-yo?” or “Yeo-gi-ga ___ ib-ni-kka?” which both mean, “Is this ___?” Or you can just write the name of your destination down on a piece of paper and show it to the driver.

Here are important rules to follow when using the Korean bus system:

1． If there are no vacancies/no more standing room, you cannot board the bus.

If there simply is no more space on the bus, you should wait for the next bus. It is also the driver’s prerogative to not stop at all if he has too many passengers.

2． When getting off the bus, get off cautiously to avoid accidents.

Sometimes when traffic is overly congested, the bus is not able to pull right up to the curb at a stop. In a situation such as this, be careful of the cars as you get out of the bus. Also, in Seoul, motorcycles frequently drive around vehicles, weaving in and out of traffic, so make sure no motorcycles are attempting to do this as you get off.

3． Hold on tight when the bus is in motion, especially if you’re standing

Some bus drivers drive quite aggressively, and sometimes you may be riding an older model bus. Either way, your ride could be bumpy with sharp maneuvering, so hold on tight.

4． When you’re carrying a bag or package

If you get on the bus and there are no empty seats, more often than not, someone sitting around you will offer to hold your belongings while you stand. You can either let them do so and thank them or choose to hold your things yourself; it’s really up to you..

5． Giving your seat up to the elderly

If all the seats are taken and an elderly person or pregnant woman comes on board, you should give up your seat for them unless someone else does first.