The English version of 10 Korean novels, part of the Library of Korean Literature collection, has been spreading the word about Korean literature in the United States and across the English-speaking world. The Literature Translation Institute of Korea translated the novels into English and published the collection last October in the U.S. The series consists of ten works by Korean contemporary and up-and-coming authors: “Stingray” by Kim Joo-young; “One Spoon on This Earth” by Hyun Ki-young; “When Adam Opens his Eyes” by Jang Jung-il; “My Son’s Girlfriend” by Jung Mi-Kyung; “A Most Ambiguous Sunday” by Jung Young-moon; “The House With a Sunken Courtyard” by Kim Won-il; “At Least We Can Apologize” by Lee Ki-ho; “The Soil” by Yi Kwang-su; “Lonesome You” by Park Wan-suh; and, “No One Writes Back” by Jang Eun-jin. Korea.net will introduce each of the ten works. This week, we bring you the first novel, “Stingray,” by Kim Joo-young. The Library of Korean Literature series is a collection of ten Korean novels published in English last October in the U.S. (Photo courtesy of the Literature Translation Institute of Korea)

The first novel in the ten-volume series is “Stingray” by author Kim Joo-young. The story is set in a small, remote mountain village nestled along the southern part of the Taebaeksan Mountain range that stretches from Gangwon-do (Gangwon Province) to Gyeongsangbuk-do (North Gyeongsang Province). The most striking point is that the natural surroundings around the village are vividly depicted, as in a scene of a snowy morning: the snow was “white as goose feathers dancing in the air.” Such a metaphorical way of describing the landscape throws watercolors into the reader’s mind, allowing him to imagine what it really looks like. That way of writing, so realistic that it feels like real pictures were popping up in one’s head, are only possible because the author himself was raised in the countryside. “The snow-covered town portrayed in the novel is quite similar to my own hometown,” said author Kim Joo-young. “I drew most of those props from my childhood memories.” As the author says, the novel stirs up nostalgia by bringing out things like kites, roosters and an outdated sewing machine. This work is aimed at turning the everyday life of normal people, who sometimes have to endure pain and hatred, into something beautiful in the form of literature, he says. The story starts in the morning as a young boy, Se-young, arises. To his surprise, he finds his small town covered with an overnight dump of snow. 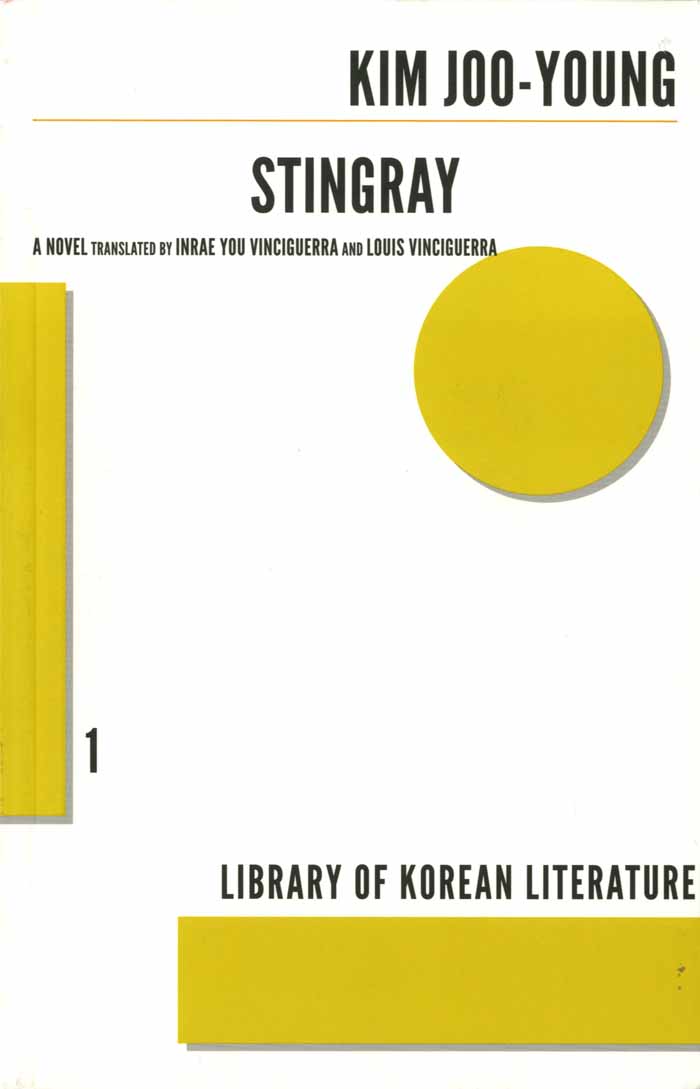 Kim Joo-young’s “Stingray” has been translated into English. (image of the original cover)

Here is an excerpt:

It was early morning. Snowflakes, white as goose feathers, danced in the air before piling up everywhere. Although daybreak was approaching, it was still warm in the room. That’s why I always slept late on snowy mornings. I could barely hear my mother breathing from the other side of the bed I shared with her. It was as if the falling snow had muffled the sound of her breath. The room was as quiet as the bottom of a deep sea. And this tranquility, where even time had seemingly stopped, was seducing me into an early morning’s sweet sleep…

The boy and his mother have been waiting for his father, who abandoned the family six years ago due to an affair with another woman. One snowy morning, they find that an 18-or-so-year-old girl has snuck into their kitchen to steal some food and won’t budge even when forced to leave. They accept the poor girl as a member of the family, but she ends up fleeing, just as the father did. On another chilly morning, when the temperature plunges beneath an endless snowfall, a mysterious woman appears and, after leaving a baby, walks away. The baby turns out to be the out-of-wedlock son of the father. With the chilly winter outside and the warmer temperatures inside, the long-awaited father finally comes back. The very next day, the boy finds out his mother, who has waited for her husband for so long, is already gone. Why is the title “Stingray”? The word “stingray” comes up many times in the story. A stingray hanging from the kitchen door gives the father his nickname. It is also a symbol of the mother’s longing and waiting for her departed husband. The availability of this book in English has been made possible thanks to two translators, Inrae You Vinciguerra and her husband Louis Vinciguerra, who jointly translated the novel. Inrae graduated from the Seoul National University of Education and has translated, together with her husband, numerous Korean novels into English.