How to make traditional Korean liquor

Two kinds of traditional Korean liquor from the Joseon Dynasty (1392-1910) have recently been revived. Under the project “Bring Back Joseon-Era Traditional Alcohol,” the Rural Development Administration (RDA) brought back to life two kinds of traditional Korean alcohol: jaju (liquor produced by boiling clear liquor, or yakju, with medicinal herbs) and jinsangju (clear rice liquor that used to be presented to Joseon-era kings as tribute from the country). Both were recreated using the recipe from Sangayorok, an agricultural manual written by medical officer Jeon Sun-eui during the reign of King Sejong (1418-1450). Jaju can be produced after six to twelve hours of heating with medicinal herbs including beeswax, black pepper, cinnamon bark, and dried orange peels in the clear alcohol “yakju.” Jinsangju is an alcohol fermented with rice crude liquor mixed with steamed glutinous rice. This fermented alcohol is known to have won the Joseon-era royal family’s favor with its unique sweet and light flavor.

How To Make Jaju

○ Prepare 17 liters of clear alcohol or yakju (about 17 proof).

○ Add about 0.3 grams of beeswax, black pepper, cinnamon, and dried orange peels.
○ Put all the ingredients in a pot and place the pot in boiling water for six to twelve hours.
○ Leave it in a cool place. 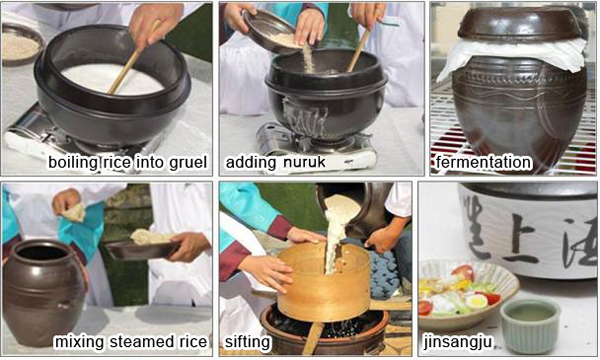 ○ Soak 1 kilogram of regular rice overnight. Grind it, then pour three liters of water in a pot with the powdered rice and boil it into a thick gruel.
○ After cooling, add 800 grams of neureuk (powdered Korean yeast) to the gruel, put it in a pot, and ferment it in a cool place for five days in spring or autumn, three days in summer, or seven days in winter, respectively.
○ Wash thoroughly 5.4 kilograms of glutinous rice and steam it. Then cool it and put the steamed rice in the pot.
○ After seven days, strain the resulting fermented rice with a sieve, and now you have sweet jinsangju.