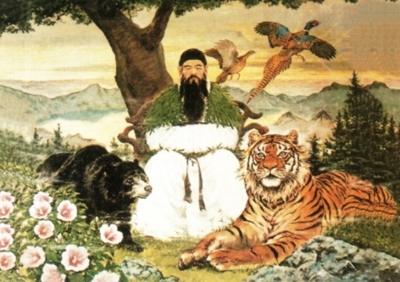 Between the Old and New Singugan (Kor. 신구간, Chin. 新舊間, lit. between the old and new) is the approximately one-week long period from the fifth day after the solar term Daehan (Kor. 대한, Chin. 大寒, Great Cold) to the third day before the solar term Ipchun (Kor. 입춘, Chin. 立春, Beginning of Spring). On Jeju Island, this is believed to be the only time when one can move or repair one’s house without any harmful consequences. According to folk belief, during this period between Daehan, the last seasonal term….

Buddhist All Souls’ Day Baekjung (Kor. 백중, Chin. 百中, Buddhist All Soul’s Day) is a major summer folk festival falling on the fifteenth day of the seventh lunar month. By this time Korean farmers could take a brief period of rest after one of the busiest farming periods of the year. They usually spent the day refreshing themselves by enjoying food and drink, and playing games. The festival was also referred to by other names such as Baekjong (Kor. 백종, Chin. 百種, lit. Hundred Kinds), Jungwonil (Kor. 중원….

Cold Food Day Hansik (Kor. 한식, Chin. 寒食, lit. cold food) occurs on the 105th day after the winter solstice and approximately April fifth on the Gregorian calendar. It is one of the four major holidays in Korea, along with New Year’s Day, Dano and Chuseok. According to a Chinese custom, people refrained from using fire and ate cold food on this day. For this reason the day can also be referred to as Geumyeonil (Kor. 금연일, Chin. 禁烟日, lit. No Smoke Day), Suksik (Kor. 숙식, Chin. 熟食, lit. Cooked ….

Day of Watching Small Stars On the sixth day of the second lunar month, people in traditional Korea used to watch a group of small stars in the western sky and, based on their observations, tried to predict the outcome of harvest for the year ahead. The name of the day, jomsaenginal (Kor. 좀생이날), is a compound of the words jomsaengi (Kor. 좀생이) and nal (Kor.날). The former is used to designate the group of stars in the western sky, and the latter stands for “day.” The term jomsaengi and its variations, jom….

Double-three Day Samjinnal (Kor. 삼짇날, lit. double-three day) falls on the third day of the third lunar month. Three being a positive number in numerology, this date containing two threes was considered to be highly auspicious. Other names of the day, which also have the meaning of two threes, are Samjil (Kor. 삼질) and Samsaennal (Kor. 삼샛날). In addition, the day can be referred to as Yeojaui nal (Kor. 여자의 날, lit. Women’s Day) and “the Day of Swallows’ Returning from the South” (Kor. 강남갔던제비오는날)…..

Festival of the Fifth of the Fifth Month Dano (Kor. 단오, Chin. 端午, lit. first fifth) refers to the traditional holiday celebrated on the fifth day of the fifth lunar month. The first syllable in the name, dan, stands for “first” and o means “five”; hence the word can be translated literally as “the first fifth”. Dano has been a major holiday in Korea since early times as the day is believed to be filled with the positive energy yang. According to a Chinese history book of the 7th century, “Suishu” (Kor. 수서, Chin. 隋書,….

Horse Day Mallal (Kor. 말날, Chin. 午日, lit. Horse Day) refers to the first day of the tenth lunar month with a celestial stem meaning “horse.” Also known as Mail (Kor. 마일, Chin. 馬日), this day is recognized as an equine appreciation day. Historically, it was associated with the custom of placing rice cakes coated with mashed red beans, known as pat-tteok (Kor. 팥떡), in front of a stable and praying for the health of the horses. People also paid homage to the horses by offering special trea….

The Seventh of the Seventh Month Chilseok (Kor. 칠석, Chin. 七夕, lit. Seventh Evening) is a folk festival celebrated on the seventh of the seventh lunar month. According to a folk tale, every year on this day Gyeonu (Kor. 견우, Chin. 牽牛, Ox Herder) meets his lover Jingnyeo (Kor. 직녀, Chin. 織女, Weaving Maid). The two characters are thought to live on the opposite sides of the heavenly kingdom ruled by the Jade Emperor. The emperor cherished the young herder’s sincerity and diligence, and married him off to his gran….

Three Dog Days Sambok (Kor. 삼복, Chin. 三伏) refers to the three days in the sixth and seventh lunar months, which are considered to be the hottest days of the year. The exact dates differ each year and are calculated based on the relation to the solar terms and celestial stems. The three Dog Days are Chobok (Kor. 초복, Chin. 初伏, lit. First Dog Day), Jungbok (Kor. 중복, Chin. 中伏, lit. Middle Dog Day), and Malbok (Kor. 말복, Chin. 末伏, lit. Last Dog Day) and occur at ten-day intervals.The concept of t….

Water Festival of the Sixth Lunar Month Yudu (Kor. 유두, Chin. 流頭) is a traditional summer festival that falls on the fifteenth of the sixth lunar month. The festival is also referred to as Sodu (Kor. 소두, Chin. 梳頭) or Sudu (Kor. 수두, Chin. 水頭) and the names are all related with the customs of washing one’s hair and taking a bath.The term Yudu, which literally means “immersing head in flowing [water]”, is an abbreviation of dongnyu sudu mogyok (Kor. 동류수두목욕, Chin. 東流水頭沐浴, lit. washing hair and body in waters f….