Korean Temples generally have a two-story tower, which visitors can see upon entering the gate. There are four major Buddhist instruments to announce the time for monks to practice their daily rites. The four instruments are the dharma drum, the wooden fish, the cloud-shaped gong, and the large brahma bell. The sound of each instrument has a function in saving beings of other realms. 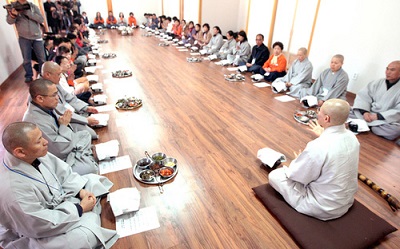 The dharma drum beats to save all beings living on earth, from humans to animals to ants, and so on. The sound of the beating drum is considered to echo the sound of Buddha’s teachings.

he wooden fish is for saving all fish. Monks strike both sides of the fish’s hollow center with two sticks in order to produce sound. The origin of this instrument can be traced to an edifying story. A long time ago, there was a monk who committed many unwholesome deeds. Eventually, he died and was reborn as a fish with a tree on its back. One day when the monk’s old master was crossing the river, the fish came to him sadly. The master looked into its past life and held a memorial ceremony to save the fish. That night, the fish appeared in the master’s dream, appreciative of his master’s kindness. He asked his master to please cut the tree from his back and make a fish-shaped instrument and tell this story as a lesson for practitioners.

The cloud-shaped gong is for saving the beings of the sky. It is made from bronze. Some temples hang this gong in the kitchen or the dining room to announce mealtime 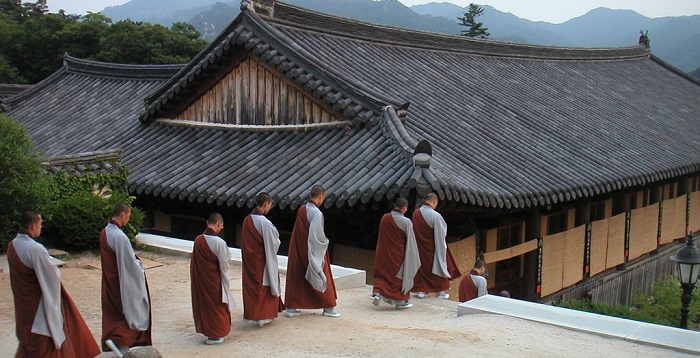 The brahma bell is for saving the beings of hell. The bell is struck 28 times in the morning and 33 times in the evening. As the bell is struck, all beings in hell are released from their suffering. A whale shaped instrument is used for striking the bell. A long time ago many dragons lived in the sea. One of them was named Po. This dragon cried often and was afraid of whales. The bell’s sound is said to be like Po’s cries.

esides the above four instruments, the mok-tak and juk-bi are also very important instruments in daily Korean temple life. The mok-tak is shaped like the wooden fish but is smaller and round. It is used in all Buddhist ceremonies when chanting and reciting sutras.
The juk-bi is made from a single bamboo shoot cut down its center. A monk will slap the juk-bi against his palm to elicit sound. It is a useful instrument to signal the start and end of meditation.
Another interesting small figure is the wind chimes, found on the eaves of Buddhist Halls and pagodas. The wind rings the chimes, awakening the monks. The explanation for the chimes’ role lies in the fact that fish live without closing their eyes, even while sleeping. Thus, monks and practitioners, like the fish in the sea, practice to continuously cultivate themselves, even in their dreams.

In Korean Buddhism there are many symbols to represent Buddha’s teachings. The Buddhist cross is called man in Korean. The original meaning in Sanskrit is a good omen. Since Buddha’s time it has been a symbol of good fortune and it represents Buddha’s compassionate mind.
A circle and a circle with three dots inside are also symbols found in Buddhist paintings and temple wall paintings. They represent the mind. The circle is a fundamental form of the whole universe, without worldly distinctions such as good or bad, like or dislike, high or low, and so forth.
Concerning the three dots, the inside of each dot symbolizes one of the three jewels of Buddhism. The three jewels are Buddha, Dharma (the teachings of Buddha), and Sangha (Buddha’s disciples).

Finally, the Lotus Flower is a well-known symbol of Buddhism. This flower has two meanings. First, the lotus flower blossoms in mud ponds, but it is not tainted and keeps its purity always. It is like Buddha and Bodhisattvas, who lived in the world but remained pure.
Second, it bears a flower and fruit at the same time. It reflects the law of cause and effect. Therefore, when Buddhists act in everyday life, they keep in mind that their actions are followed by results.