The Wonders of the jangdokdae

One of the many words in Korean daily life that it is impossible to translate into English is jangdokdae. The commonly used term “storage platform” leaves readers who are unfamiliar with Korea at a loss to imagine what is being stored or how. If you visit a traditional Korean house with a large enough yard or garden around it, especially in the rural areas, you will find a platform, sometimes slightly raised above the ground level, holding a number of larger and smaller brown pottery crocks, usually covered with lids of the same color. If the sun is shining, you may find that the lids of some have been removed and that the tops are covered with gauze to keep the flies out. One or two may have more modern lids containing glass through which the sun can shine. Rural restaurants and the larger Buddhist temples often have a fine array of such crocks, known in Korean as hangari or onggi. 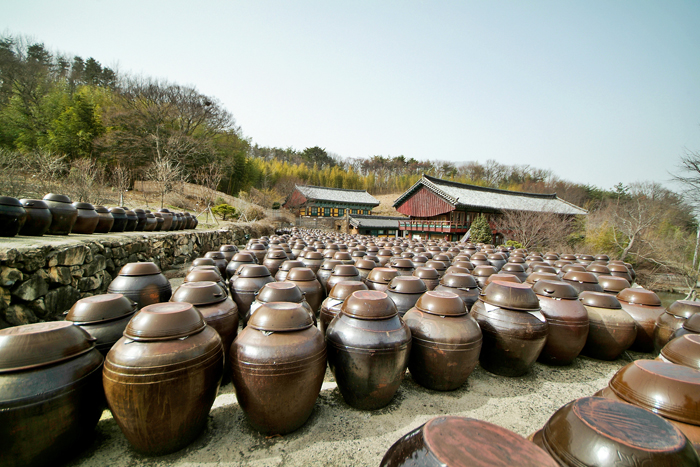 The dictionary will tell you that these pots contain “sauces and condiments.” These vague terms are partly explained by the problem of finding adequate English words for doenjang and gochujang, usually rendered as “bean paste” and “red pepper paste,” although “soy sauce” is a fairly familiar term in English for what is known in Korean as ganjang. After a few Korean meals, the foreign visitor will begin to be familiar with the terms, and their tastes, but will still be unclear about how these products come into being. Even Koreans today have mostly only a vague idea, since they have no jangdokdae in their apartment, and merely buy and bring home small quantities of these pastes and sauces from a nearby shop. This is a great pity, since commercially made doenjang, in particular, never has the same intensity of taste as that made at home in the traditional way. The most surprising fact for most foreign visitors is the close link between doenjang and ganjang, bean-paste and soy sauce. They usually have no idea how soy sauce is made. I often find myself having to explain that in earlier times, when almost everyone lived in a traditional Korean house, in the countryside, the winters were impregnated with the smell emanating from brown oblong blocks known as meju hanging from the ceilings. These were made of soy beans that had been boiled, drained and roughly ground, then shaped into blocks and left to dry standing on dry rice straw on a hot ondol floor. They spent much of the winter hanging in a well-ventilated space, quietly fermenting. They were then packed into large onggi crocks and covered with salted water; some dried red peppers, a stick or two of charcoal and a few dried jujubes were placed on the surface of the brine. Some weeks later, the peppers etc. were removed, the liquid was strained and drained into clean jars, sometimes being made stronger by boiling off part of the water; it had turned into dark brown ganjang, soy sauce. The soft lumps of meju remaining after the soy sauce had leached out were drained and packed into clean crocks to mature and become doenjang.

These are the main contents of the hangari on the jangdokdae and by being exposed to sunlight they go on maturing, sometimes for many years. Really good restaurants may boast of using ganjang that is fifteen years old. The other common sauce is gochujang, the red pepper paste that is made by mixing together powdered meju or doenjang, glutinous rice flour and finely ground red pepper husks. This too requires long maturing with frequent exposure to the sunlight if the full flavor is to develop. Beside these fundamental sauces, the jangdokdae usually holds pots of different kinds of recently made kimchi, unless it is winter when the pots of kimchi used to be buried in the ground and sheltered under thick mats of rice-straw to keep them from freezing. Smaller pots hold the strongly flavored jeot and jeotgal, salted fermented shrimp, anchovy or other kinds of fish, which are so important a part of the Korean meal, and so unfamiliar to non-Koreans. These too are sometimes matured and aged for many years. Finally, and today rarely, there might be crocks holding newly made makgeolli or dongdong-ju.

All of these products, which used to be produced at home by the women in every Korean household, following detailed methods which were passed down strictly from mother-in-law to daughter-in-law, are now mainly purchased in shops or markets. The doenjang is often made following the Japanese method for making miso, a far less tasty form of bean paste; the mass-produced gochujang is less pungent, often rather sweet, and of doubtful durability. The pressures of modern life and the restricted space in apartments make this inevitable. Lucky families still have a grandmother living in the home village, who supervises at least the making of the gimjang, the kimchi designed for use during the winter, by all the women of the family gathered in her yard. So Korean culture has replaced the jangdokdae with the kimchi refrigerator. This, it must be said, is a wonderful invention that allows a housewife to store her different kinds of kimchi at just the right temperature. They will never go bad even in the hottest summer, never freeze in winter. A great blessing! But it remains true that what passes for doenjang in today’s supermarkets is usually far from possessing the subtle, natural flavor that we sometimes enjoy in simple rural houses. Modern Korea has had to adapt to urban life in so many ways. There are gains, but there have also been sad losses.

Discover Korea with the RAS
[The Royal Asiatic Society Korea Branch, founded in 1900, is an association of people, Koreans and non-Koreans alike, who wish to deepen their knowledge of Korean life, culture and history, and share that knowledge with others in English. https://www.raskb.com/]