Korean history comes together in Chungju

The city of Chungju is located in Chungcheongbuk-do (North Chungcheong Province), in the heart of the Korean Peninsula. It’s a city with a population of just over 200,000 and a long history, sitting in the heart of the Jungwon region. With the Hangang River and its southern tributaries flowing through it, the province has long been an important geographical point that connects the north and central parts of the peninsula. It can also easily connect the east, west, south and north together by land, too.

During Goguryeo times (37 B.C.-A.D. 668) the region was home to the Gukwonseong Fortress (국원성, 國原城), playing an important role especially between the early 5th century and mid 6th century. Later invaded by the Silla Kingdom (57 B.C.-A.D. 935), under King Jinheung (r. 540-576) it became the Gukwonsogyeong, an administrative district. In the 8th century, King Gyeongdeok (r. 742-765) expanded the region to become the Jungwonsogyeong Administrative District. Since those times, authorities in the province, especially centered around the city, have had the power to control the entire peninsula.

To commemorate all this, the Jungwon Storage Center of Excavated Artifacts opened on December 11, bringing together all the historical heritage items. 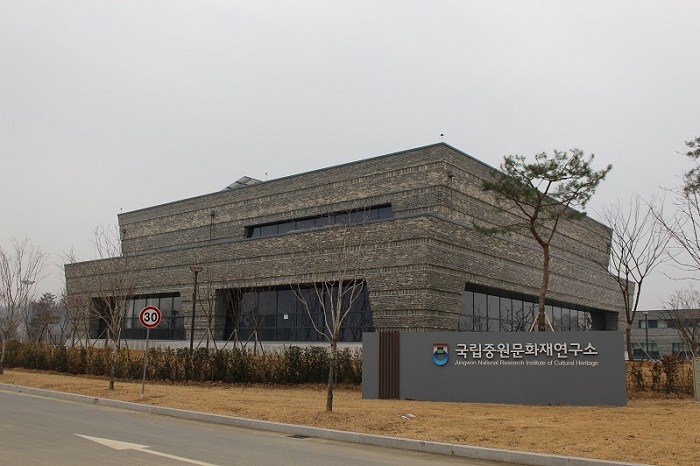 The Jungwon National Research Institute of Cultural Heritage moved to its new location on December 11, seven years after opening. The Jungwon Storage Center of Excavated Artifacts is located inside.

The Jungwon Storage Center of Excavated Artifacts is a three-story building located at the Jungwon National Research Institute of Cultural Heritage (NRICH), part of the Cultural Heritage Administration. The 6,938-square meter building is on 16,430 square meters of land and cost KRW 17.9 billion. Construction began in June 2011 and was completed in December this year. The building is equipped with exhibition rooms, learning facilities and rooms for kids and the general public, as well as accommodations for researchers, a rare facility among research centers.

By using the new storage center, the NRICH looks to preserve the region’s historical artifacts and promote their wider use and understanding among local residents. Kim Derk-moon, director of the NRICH, is an expert in the restoration of historical artifacts, having majored in Joseon wooden architecture at the Chungbuk University and having had many years of relevant work experience. He was involved in the restoration of Namdaemun Gate and the Mireuksaji stone pagoda in Iksan, and the planning of the Seonbichon, a reconstructed village with many Confucian academies.

Korea.net sat down with Kim to hear about the history of the Jungwon region and future plans at the institute.

Kim Derk-moon, director of the NRICH, explains that just about any aspect of Korean history can be found in Chungju.

What’s the background to the construction of the heritage center?

It’s an important principle in this field that newly-excavated artifacts should remain where they were discovered. Up until now, we weren’t able to afford to stick to that principle in terms of facilities or finances. The government has a responsibility to keep safe important national treasures. In North Chungcheong and Gangwon provinces, there’s no such government institution to perform that function. Since 2007, with the establishment of the NRICH, it has stored the important artifacts excavated in North Chungcheong and Gangwon Province. Normally, newly excavated items are stored for some time to test their stability and capacity for preservation, before being put on display. This facility is designed to educate people about their region’s ancient culture and history.

It’s designed to encourage participation by the general public. What’s behind the inspiration of such a design?

It’s part of my duty to help the region establish its own historical identity and to introduce people to the region’s history and traditions. The size of the exhibition space and museum is not very big, but it will be good enough for people to learn about the region’s historical value. The facilities will be curated by local volunteers, and most of the historical items will be introduced at a kid’s level so that people can access it without difficulty.

It’s true that most people have a tendency to feel some distance from their ancient past or from classical literature and history. Looking at it in-depth, it is scientific and has historical and philosophical depth. However, the public’s perception toward cultural heritage is very important. I think we should work more to raise awareness and to create an environment where we have the responsibility to preserve our heritage. I believe that we should open the facilities to the public and focus on authentic studies.

How’s the region of Jungwon perceived in Korean history?

Transportation routes, including waterways and land routes, were well-developed across the region. Centered around Chungju, it was easy to get to Seoul and to the southeast regions of the peninsula. The region is also known for the production of iron, as is the city of Zhengzhou (鄭州) and the Zhongyuan District (中原) in Henan Province (河南) in China. One of the common features that Jungwon had with those regions was that it produced iron, an important material for the foundation of an ancient nation. However, even if a kingdom had abundant iron, it wouldn’t be able to grow without transportation routes. Fortunately, this region had both.

With these merits, the region naturally began to trade with neighboring kingdoms. The whole nation was brought together here in the heart of the peninsula. In the seven-story stone pagoda in Tappyeong-ri, we see some notable Goguryeo influences. For example, there are many images that stretch upward. Mireuksa Temple in Suanbo-myeon sits toward the north. The principal statue of Buddha is Maitreya, the future-oriented Buddha. Sculptures of turtles are shaped in a simple yet dynamic manner and look toward the north, too. Among the stone caves here, one boulder alone weighs some dozens of tons. It suggests that the stones had influences that are rare in the southern regions of the peninsula. A quick glimpse at it suggests influences from northern Goguryeo cultures.

It seems as if the Jungwon region was the center of Korean history. What went on here during ancient times and during Joseon times?

Yeoju City in Gyeonggi Province is a point of intersection between the Namhangang and Bukhangang branches of the Hangang River, very close to Chungju. Accordingly, trade and transportation developed naturally here. It was a site of importance during the Japanese invasions in the 1590s. The nation was safe from serious damage as long as Chungju didn’t fall. The Buddha carved into the rock cliff face at Deokjusa Temple in Wolaksan Mountain look very elegant, reminiscent of sculptures from Baekje times (18 B.C.-A.D.660). The 15.6-meter statute has both elements of Baekje and Silla art. These factors suggest that this region saw various regional sub-cultures combine and get infused together. Two aforementioned things — the production of iron and geographical features — contributed to the formation of such a region.

Facilities at the NRICH are designed for kids. Children are given the chance to wear a uniform and to try their hand at a wide array of activities.

Throughout history, it seems as if the region would have been a good place to live. Was it?

There’s a phrase which goes Saeng-goe Jin-cheon (生居鎭川), which suggests that Jincheon is a good place to live. During the Joseon Dynasty, Jincheon was selected as one of the best places in which to live. It is close to Chungju. It was only a small town, but the Jungwon region strategically links all four cardinal directions: the east, west, south and north. The center of Goguryeo (37 B.C.-A.D. 668) was Pyeongyang and that of Baekje (18 B.C.-A.D. 660) was Gongju and Buyeo. The center of Silla (57 B.C.-A.D. 935) was Gyeongju, and the center of Goryeo (918-1392) was Gaeseong. We can find everything about Joseon (1392-1910) in Seoul. Each of the aforementioned cities have a connection with the region of Jungwon and the city of Chungju.

What’s the future of the Jungwon region?

One of the biggest changes expected to happen is transportation. The city has cultural elements that represent many regions of the country and that will be coupled with its geographical merits, bringing the region to its glory days again. The Jungwon region is advanced in the field of geography, the humanities and communications. Don’t you think it has already proved that, with its history of past glories?

A Buddha carved into a rock face (top) and a Silla tomb (bottom) are part of the outdoor exhibition area at the NRICH.

Newly excavated artifacts, including ironware, are tested to see whether or not they can be preserved before being put on display.