It is generally believed that Paleolithic man began to inhabit the Korean Peninsula about 40,000 to 50,000 years ago. Neolithic man appeared in Korea around 4,000 B.C., with signs of their active presence around 3,000 B.C. being found across the peninsula. It is believed that these Neolithic people formed the ethnic stock of the Korean people. Neolithic people dwelled near the seashore and riverbanks before advancing into inland areas. The sea was their main source of food. They used nets, hooks and fishing lines to catch fish and gather shellfish. Hunting was another way to procure food. Arrowheads and spear points have been found at Neolithic sites. Later, they began to engage in farming using stone hoes, sickles and millstones.

Rice cultivation started during the Bronze Age, which lasted in Korea until around 400 B.C. People also lived in thatch-covered pits, while dolmen and stone cist tombs were used predominantly for burials during the period.As agriculture became a principal activity, villages were formed and a ruling leader with supreme authority emerged. Law became necessary to govern the communities. In Gojoseon (2,333 B.C.-108 B.C.), a law code consisting of eight articles came into practice, but only three of the articles are known today: First, anybody who kills another shall immediately be killed. Second, those who injure another’s body shall compensate in grain. Third, those who steal another’s possessions shall become a slave of their victim.

Hanok, Korean traditional houses, remained relatively unchanged from the Three Kingdoms period through the late Joseon Dynasty (1392-1910).
Ondol, a Korean underfloor heating system, was first used in the north. Smoke and heat generated from the low-lying kitchen stoves were channeled through flues built under floors. In the warmer south, ondol was used together with wooden floors. The major materials of traditional houses were clay and wood. Giwa, or black-grooved roof tiles, were made of earth, usually red clay. Today, the Presidential mansion is called Cheong Wa Dae, or the Blue House, for the blue tiles used for its roof. 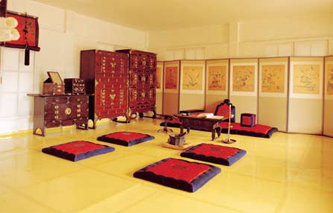 Ondol
In modern usage it refers to any type of underfloor heating or a room that follows the traditional way of eating and sleeping on the floor.

Hanok were built without using any nails and were assembled with wooden pegs. Upper-class houses consisted of a number of separate structures, one for the accommodation of women and children, one for the men of the family and their guests, and another for servants, all enclosed within a wall. A family ancestral shrine was built behind the house. A lotus pond was sometimes created in front of the house outside the wall.. 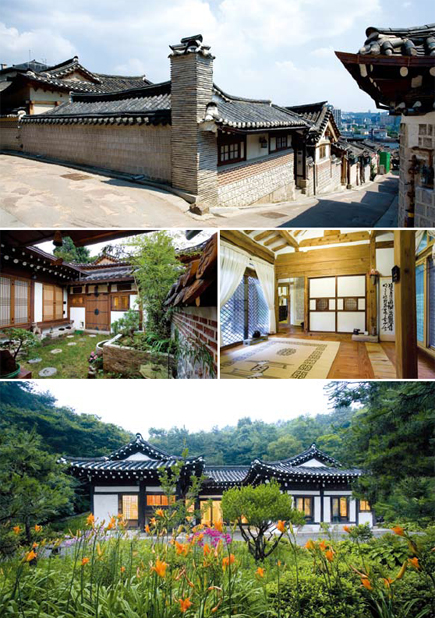 The form of the houses differed from the colder north to the warmer south. Simple houses with a rectangular floor and a kitchen and a room on either side developed into an L-shaped house in the south. Hanok later became U- or square-shaped centered around a courtyard.

From the late 1960s, Korea’s housing pattern began to change rapidly with the construction of Western-style apartment buildings. High-rise apartments have mushroomed all over the country since the 1970s but the ondol system has remained popular with heated water pipes taking the place of smoke flues under the floor.