Hanok, traditional Korean houses, are environment-friendly establishments as they are built with materials readily available in nature, such as wood, earth, stone, straw, clay (for ceramic roof tiles), and paper. The two major types of hanok are giwajip (houses with tiled roofs) occupied by the nobility and chogajip (houses with straw-thatched roofs) inhabited by the peasantry.
The most distinctive difference between these two types of houses is the roof. As suggested by their names, the giwajip is covered with tiles called giwa . Such houses were expensive and not considered affordable by the common people. A chogajip has a straw-thatched roof, which was a bountiful by-product of rice cultivation. Although the chogajip is a rare sight today, some Koreans still live in giwajip.

n order to build hanok, wooden pillars and frames are set up. Then, bricks made of earth and grass are used to fill in the frames. Floors are made of stone and earth. Hanji (traditional Korean paper) is pasted on the wooden window frames and doorframes. Walls are also finished with hanji. For the flooring, oil-coated hanji is plastered. Hanok constitute an important part of Han style because of their unique, yet very scientific heating system called ‘ Ondol (Traditional Heating)‘.

The ondol system includes a firebox below and flues that heat the entire floor from below. To accommodate the ondol system, the floor of the hanok was elevated above the ground, and rooms were made relatively small to maximize warmth. Since floors were heated and warm, people did not use beds or chairs and liked to sit or lie down directly on the floors, as is still commonly done today.

Today, in modern Korea , many use beds and chairs in Western-style apartments and buildings, but the floor-heating ondol system is still used in all residential buildings. Because people generally sit on floors, you must take off your shoes when entering a Korean home. 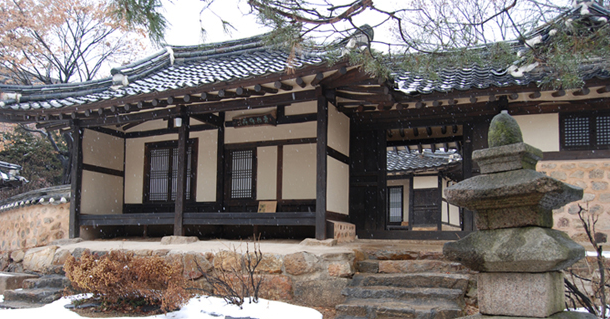 Many people in Korea have recently begun to suffer from modern skin diseases, such as atopic dermatitis. Ever since the release of scientific findings that the environment-friendly hanok (or yellow soil house) is good for atopic dermatitis and has various other health benefits, many retirees or those building new homes in provincial areas have built hanok.

Enough hanok have been preserved in many places that some Koreans still continue to live in them. In addition, Hanok Living Experience Centers have been opened in many parts of Korea for those who would like to experience living in traditional Korean houses. Major facilities include Jeonju Hanok Village, where you can experience both traditional culture and hanok; Haehoe Village, a representative traditional village in Andong where traditional heritage is well preserved; Jirye Art Village; Suaedang; Imcheonggak; and Rakkojae in Seoul.