Cultural enrichment” has been proclaimed as one of the four policy priority areas of Park Geun-hye’s administration. The cultural enrichment initiative aims to raise the level of happiness of individual citizens by offering them the chance to become a producer and a consumer of culture.

This month, celebrating the Month of Culture, over 1,200 cultural programs have been prepared nationwide.
During Culture Week (October 16- 20), which is centered around Culture Day, October 19, the third Saturday of October, a diverse range of participatory and interactive events are being planned at Culture Station Seoul 284, in the old Seoul Station building. It’s titled “I am an Artist. This is Cultural Village.” 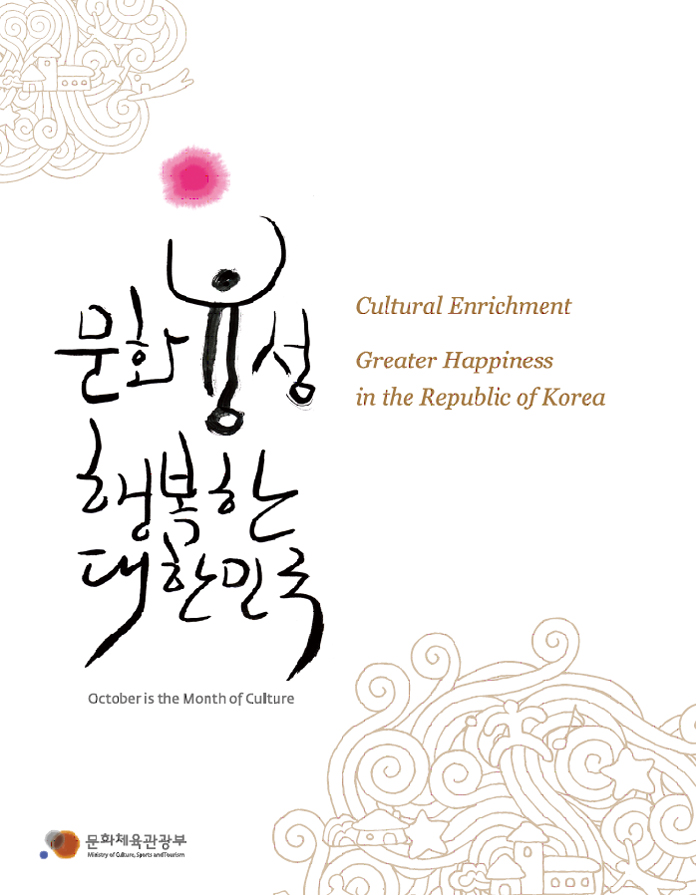 Promotional poster for the Month of Culture campaign

As part of the events, clubs, associations, dance troupes, theatre groups and other assorted “cultural societies” from across the nation will join together at Culture Station Seoul 284 to jointly celebrate the month of culture. There will be theatre performances in venues as small as just one pyeong, roughly 3.3 square meters. There will be art displays and musical performances. There will even be a phone booth book-exchange, where people bring their own books to exchange for others.

A diverse range of cultural programs has been planned. Clubs, associations and art groups from across the nation will gather on October 12 at the Bundang Jandi Madang, in Bundang, and on October 19 at Culture Station Seoul 284, in Seoul, to celebrate Culture Month with competitions, displays and performances. A culture and arts festival specifically featuring disabled artists will be organized from October 1 to 15 at Seoul Square, in front of City Hall. It will remind us all that everyone in society should have access to culture, regardless of superficial differences. In addition, events focused on the elderly, who are about to start the second chapter of their life, will be held on October 16 at Cultural Station Seoul 284. Immigrants who are likely to form multi-cultural families and other non-Korean members of our community will be featured on October 16 and 17 at Cultural Station Seoul 284. An orchestra of adolescents will perform on October 20 at Deoksugung Palace, near City Hall.

Values and charms of Korean tradition to be shared

Gugak Performance at Noon will be held at Seoul Square, in front of City Hall, from October 16 through 18, in an effort to share Korea’s traditional musical delights. With the slogan, “Spirit, Youth, Tradition,” events will showcase performances of sajachum (lion-masked dance), Gaksori Noreum (a singing beggar), samulnori (traditional percussion music) and other folk instruments such as janggu and other drums. There will be free lunch for pasersby, as well.

There are also events planned around both language and fashion. In celebration of Hangeul Day, October 9, recently re-proclaimed as a public holiday, a Hangeul Culture Party will be held from October 7 to 13 at Gwanghwamun Square. The Culture Colored with Hanbok event on October 17 at Cultural Station Seoul 284, at Seoul Station, will introduce visitors to the beauty of Korea’s traditional clothing.

More information about the Month of Culture and Culture Week events is available at the official website (www.munhwamon.org) (only in Korean), or from the organizing committee itself (02 723 5057).